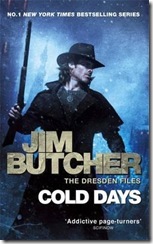 Cold Days is Jim Butcher’s latest Dresden Files novel  of which there are fourteen.

I wouldn’t say I am a fan of the Dresden files but I have 3 titles from across the series and also own the TV series as well (not bad for its time, but a little dated now).

Now Butcher has been heavily criticised for not having an awareness of his privilege as a white male author in regards to both sexism and racism.  There’s a clanger of a passage on the  first page of the hardcover:

She was probably too young to drink legally and she was one of the lovelier women I’d ever seen in person. High cheekbones, exotic almond shaped eyes…

Now yes this is Harry Dresden the character and not Jim Butcher the writer.  It would have been nice though if Harry had gained some wisdom and perspective over the fourteen books.  That being said the series has roots in the Hardboiled genre so unless you are Megan Abbott your going to be relying on a genre that has some hefty sexist baggage as part of its modus operandi.

Cold Days though, is a bit of a departure from that genre, the detective shtick.  It’s more of an urban fantasy adventure novel where the stakes are very high. And that’s where it lost me to some degree – I prefer the smaller scale Dresden.

Cold Days felt long and at just over 500 pages it’s 100 pages longer than Fool Moon, the other Butcher novel I own.  This was exacerbated by the fact that it’s written in the first person and there seemed to be more exposition or info dumping than normal.  I can understand the need to fill-in newcomers to the series, but Cold Days had me skimming some of Harry’s longer passages.

So Cold Days was not as enjoyable as the earlier Dresden for me - but then I am not the same reader I was then either.  I feel that Dresden is outgrowing the Genre that he started, in moving closer to a level of super heroism.

Fans of Dresden will likely have already bought Cold Days.  For the newcomer you’ll enjoy this if you like you urban fantasy on a large apocalyptic scale.  If your looking for the Phillip Marlowe of Urban Fantasy I’d suggest you check out the early Dresden books.