What could be better than Steampunk?  Why, Steampunk plus Zombies of course.

And who do we have to thank for this delightful mix of subgenres?  The very appropriately named Cherie Priest(hey, I think her name is steampunk-ish). 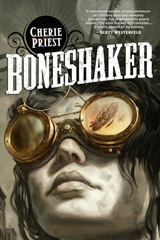 is Cherie's first novel set in The Clockwork Century world.  One thing that impresses me is that Cherrie seems to be very internet savvy.  Not only does she maintain a blog, but also a separate website specifically for the world in which her novels and short stories are set.

I sincerely wish more writers would do this – developing extra content the builds on the back story/history of the world they create or alter.  One of the great things about reading JRR Tolkien is the immense history that serves as the foundation of his stories(indeed some may say its more interesting than the actual story).

With the internet and the ease of creating websites I would think that there are almost limitless opportunities to enrich the experience of your readers/fans far beyond their reading of the novel.  The opportunity to blend world creation/immersion with merchandising and fan created content has me wondering why more writer don’t do this.  Check out JC Hutchins as a good example of what I am talking about.

Aside from Boneshaker, Cherie has a number of other written works floating about in the Clockwork Century world, including some with characters from Boneshaker.  Those who abhor the idea of book trilogies will be happy to know though, that Cherie’s subsequent works are not part of the same story line.

If you are not convinced by my review (to follow) you can perhaps check out  Cherie’s writing for free.  She has a short story that you can read  here called Tanglefoot set in the Clockwork Century World.

Now those of us not graced with good fortune of having studied American History, which no doubt includes a number of Americans, need not fear missing out on anything pertinent to the story.  I don’t think that we miss out on too much if we don’t know who Stonewall Jackson was.  Mind you with Wikipedia a click away, perhaps we should tae the time to find out – it can only enrich or understanding and immersion in the story.

Boneshaker is set in Seattle and takes place solely in that city.  Cherie gives the reader some broad brushstrokes  on the state of America at the time the novel is set but its not  necessary to enjoy the telling of the tale:

It is 1880. The American Civil War has raged for nearly two decades, driving technology in strange and terrible directions. Combat dirigibles skulk across the sky and armoured vehicles crawl along the land. Military scientists twist the laws of man and nature, and barter their souls for weapons powered by light, fire, and steam.

But life struggles forward for soldiers and ordinary citizens. The fractured nation is dotted with stricken towns and epic scenes of devastation—some manmade, and some more mysterious. In the western territories cities are swallowed by gas and walled away to rot while the frontiers are strip-mined for resources. On the borders between North and South, spies scour and scheme, and smugglers build economies more stable than their governments.

This is the Clockwork Century. It is dark here, and different.

The novel is named after a contraption invented by the protagonists husband – Leviticus Blue.  He’s part inventor, part mad scientist from the descriptions given in the novel(he is presumed dead for most of it).  The story unfolds that Leviticus invented the Boneshaker( a giant steam powered mining contraption) at the behest of Russian interests wanting mine through the ice in Alaska.  On a test run of his machine,, Leviticus tunnels under the city collapsing the banking area and unknowingly releases a gaseous substance that turns people into Rotters(zombies).  The affected part of the city is walled up and a once proud city limps by.

Which is where our protagonists Briar Wilkes(formerly Briar Blue) and her son Zeke come in.  Briar scratches out a living for herself and Zeke by working at a local processing where the inhabitants purify the city’s water (contaminated by the gaseous blight).  She bares the constant brunt of nasty practical jokes as the city’s populace hold her responsible for her husband’s activities.  She doesn’t tell Zeke much about his father and this withholding of information is what eventually acts as a catalyst for the story.  Zeke wanting to learn more about his father and recover the family’s good, name decides to go under the wall and as all steampunk, gun wielding motherly heroines are want to do, Briar follows him.

What follows is a very cinematic adventure involving the discovery of a functioning underground society within the walls, smugglers airships and a quietly simmering conflict between a mad scientist named Minnericht and the regular denizens of the walled in city.

Oh, and the ever present rotters.

While within the city people are confined to pressure sealed underground passages and rooms or if venturing above they must wear gas masks(whose filters last only a couple of hours) and protective clothing, sticking to the rooftops as the Rotters roam the streets and will swarm if enough noise is made.

This setting struck me as an ideal setting for a tabletop miniatures or a console game(ala Bioshock - see, merchandising).

As with Leviathan the cover of Boneshaker ensnared me with its sepia toned woman in goggles. The interior of the book is interesting as well, brown ink on cream paper.

I like the isolated, industrial, apocalyptic feel of the novel.  There is some sense of the larger outside world, but it’s beyond the reach of the main characters. I also like the fact that the protagonists are not your usual fare – a teenage boy and his mother.  Briar is believable as the gun toting daughter of Sherriff  and Zeke is a convincing teenager(convinced of his own indestructibility).  The twist at the end was a surprise and one that I felt I should have seen coming but didn’t.

If I have any criticisms of the book it’s that I wanted more( I am not averse to trilogies).  I felt that there were more adventures to be had by Zeke if not Briar.  There was also a moment in the book where Zeke and Briar seemed to be just missing each other by hours – this bordered on frustrating as opposed to suspenseful for me.

The airships  didn’t feature as prominently as I hoped but I hear that one of Cherie’s following novels aims to rectify that situation.

All in all I think the book is excellent movie material- if we can get zombie pirates in Pirates in the Caribbean surely we can get steampunk zombies, no?

Due out this year is the novel Clementine, which you can read about here and Dreadnought later in the year – a synopsis is here.