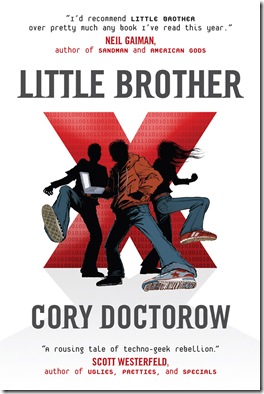 I am no longer an e-book virgin.

I have just finished reading Cory Doctorow’s Little Brother, which you can purchase through your local bookstore or if you have an e-reader or Kindle for PC you can download it here legally and for free in multiple formats. Cory does this with all of his novels – that’s right all for FREE.

If you have trouble understanding this concept check out his explanation here.

I have been sceptical about e-readers.  I thought I was destined to be the one of the last of a dying breed of people – those brought up on paper books. Indeed I struggle at reading long pdf’s and in the past if even if a book existed free or in text/ html  I much preferred to read it in paper format.

E-readers and e-reading software I think has changed that, especially for me.  I am now considering the Kindle (one of my greatest frustrations with reading Little Brother was that I had to lug the laptop around, not as I expected, eye strain from reading off the computer screen)or if possible a cheaper reader that can handle multiple formats.

But about Little Brother

You might have guessed by the title that the book is a riff off Orwell’s 1984 and you’d be right.  The story is one of resistance against the state but set in very near future ( it’s set after   9/11 , but the technology used is  I think very current)it’s what might happen to American freedoms if another attack were to occur on American soil.

As far as I can tell Little Brother is  Doctorow’s first young adult novel, the protagonist is Marcus, a 17 year old computer and tech geek. While playing an ARG(Alternate Reality Game) with school mates Marcus is caught in a DHS (Department of Homeland Security) dragnet, after a terrorist attack in his city.  Marcus is smart and has a good understanding of his constitutional rights, it’s his defence of these rights that really propels the story:

"What have you got to hide?"

"I've got the right to my privacy," I said. "And I want to speak to an attorney."

"This is your last chance, kid. Honest people don't have anything to hide."

"I want to speak to an attorney." My parents would pay for it. All the FAQs on getting arrested were clear on this point. Just keep asking to see an attorney, no matter what they say or do. There's no good that comes of talking to the cops without your lawyer present. These two said they weren't cops, but if this wasn't an arrest, what was it?

In hindsight, maybe I should have unlocked my phone for them.

Marcus ends up being interred in a Guantanamo bay like facility an action that propels him into becoming a rebel with a cause.

The story plays to my left leaning liberal sensibilities.  It highlights everything that is worrying about western society’s quick turn to the right, to the climate of fear promoted by governments that see fear and security as election winning platforms.  The book may be set in an American context, but it has applications for a far wider audience.  Take cc camera surveillance in the UK or indeed the railroading of the Internet Filter in Australia ( or even more sinister, the Ozlog affair).

Doctorow’s writing was  fast paced, exciting and easy to read.  Like other Young Adult novels I have read, this one didn’t strike me as being any less of a rollicking good read for that fact.  There’s a bit of violence, a sex scene and description of torture so it’s not Alice in Wonderland, but it is pitched at 15 to 17 year olds.  I found some of the info dumps distracting from the flow of the book, but these were both interesting and necessary in there own right, especially considering what the book is intended to be, beyond just an action packed tale.

There’s more to this book than the story

While both 1984 and Little brother can be described as a fight for justice, and  liberty against the oppressive state, Little Brother is also something different.  1984 is a warning, a parable about what might occur (indeed some may say Orwell was almost prescient in some of his storytelling).  Little brother is simultaneously  a  story, a manual for resistance against an oppressive state and an attempt to get teens to look at the double edge nature of new technology.  Contained within it pages are references to real world resources and technologies for guarding your privacy or avoiding electronic surveillance.  Indeed the book has been most recently translated into Persian by Iranian activists in the hope that it might inspire a response in Iranian youth.  The book contains wealth of historical information on civil disobedience, enough hopefully to whet the young adolescent thirst for knowledge.

Skeptics and fans of reality will, I think enjoy Cory’s tone, here’s an example-my emphasis:

Which is why I prefer to inject a little randomness into my attacks on gait-recognition: I put a handful of gravel into each shoe. Cheap and effective, and no two steps are the same. Plus you get a great reflexology foot massage in the process (I kid. Reflexology is about as scientifically useful as gait-recognition).

So do yourself a favour, buy the book and/or download it for free.

Just read it, I don’t think you’ll be sorry.

Edit: Please find the  link (right, save as) to copyright free (Australia)version of George Orwell's 1984 in .prc format for Kindle