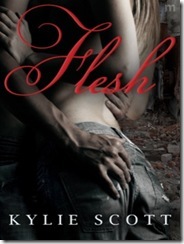 It was Scott’s energy and humour in the free first chapter that intrigued me and the rest of the novel didn’t disappoint.

Now it is erotica and if you blush rather easily or prefer sex between characters to be handled off page, then you probably won’t enjoy Flesh. Though you could just read the action scenes.

Scott’s a fan of B grade horror movies so I was expecting something a little more camp.  The background is light, but has an Australian flavour it carries the romance and the action well. Anything more would possibly have distracted us from the aim of the novel which was to arouse and entertain.  So I was pleasantly surprised at the action genre elements she presented.

There’s almost as much action as their is romance and I find myself a little surprised at how balanced the novel is.  I don’t know what I was expecting, my erotica reading has been limited to short stories which regardless of whether they are considered literature or “smut” tend to be a brief set-up followed by an “action scene”.

Flesh features a good number of sex scenes, some unconventional and kinky but these are carried along by well structured action story and some decent emotional characterisations.

My one concern throughout the novel was that Ali was a bit passive.  There is character growth though and the relationship between her, Finn and Daniel is fairly even by the end.

It was fun, eminently readable ( I could not get past the first paragraph of Fifty Shades) and I must admit that I will be interested in the follow up novel – for the characters of course.

In all seriousness, it’s a good blend of erotica, action and romance. The romance tag might put male readers off, but I’d say they’d be missing out.

This book was provided by the publisher at no cost