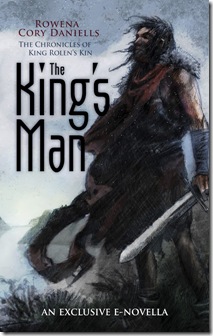 The King’s Man is an an exclusive ebook set in the world of the King Rolen’s Kin Trilogy.  Its official release date is the 6th of December.

Lucky for you(but more so for me), I have through my knowledge of the Dark Arts™  managed to obtain a copy ahead of release, by which I mean Rowena asked if I would like to read it.

Long time readers will know that I am a fan of Rowena’s work.  Her fantasy writing is economical (no padding), engaging, superlatively paced and at times deceptively crunchy.

The King’s Man continues in that fine tradition.  This novella takes a secondary character from the trilogy, Garzik son of Lord Dovecote, who readers previously thought was probably dead and follows his adventures.  Rowena dedicated the book to a reader with the following:

To Leanne, who refused to believe that Garzik was dead

And I thought to myself; what a lovely gesture, bringing a much loved secondary character to life.  Leanne may well wish,however, that Garzik’s fate remained lost in that ill-defined limbo between the writers brain and the page, for his adventures are not altogether pleasant.

Garzik fails to light the beacon that will warn Rolencia of invasion and is captured by Merofynian forces and sold into slavery. Much more than that I will not tell, sufficed to say that Rowena is not afraid of hurting the characters or making the reader feel uncomfortable. There is also a subtle expanding of the secondary world of King Rolen’s Kin, as the novella gives us an insight into the peoples of the Utland Isles.

I detect a somewhat darker tone creeping into The Kings Man.  If you have read both King Rolen’s Kin and The Outcast Chronicles, you will certainly feel a difference.  For while A King’s man sits in the King Rolen’s Kin world, its tone is darker and similar to Rowena’s later books.

I’ll admit I did have concerns that the shortened format would have an effect on the tale.  Rowena writes fantasy that is bursting at the seems with beautifully crafted and constructed content, I was worried that it might not work in shortened format.

Those concerns were unfounded.  I found myself in that familiar state, where I am eagerly turning pages, fully engaged with the text, feeling the story.  Rowena has done it again and I suspect and hope that Garzik will feature in a future King Rolen’s King novel, which this novella would be an apt lead into.

If you're a fan you’ll want to read it.  If you haven’t read Daniells before you should read it.  I hate to define authors in terms of other authors works, but Rowena's work has the darkness of tone present in A Song of Ice and Fire, or a Joe Abercrombie novel matched with a thriller like pacing of a Barry Eisler.  A Game of Thrones on speed if you like.