The majority of sci-fi & fantasy readers are men 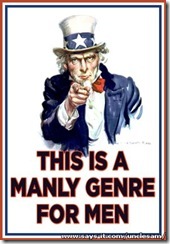 was the first point in a response to Tansy Rayner Roberts cross posted article on Tor  (Go read it, Tansy has a Doctorate in Ancient History and she’s an award winning fantasy author).

For those staying here -Tansy’s points as mansplained by me are:

But back to the title, I think the title and its subsequent points at the TOR post are in interesting statement of a mistruth, a misperception, a myth if you will. Not that I think the commenter was being consciously sexist, just not willing to challenge their own assumptions (Never mind that there’s a host of problems defining what science fiction and fantasy is and looking for actual evidence beyond anecdote).

Myth: That SF & F is the domain of men and women are recent interlocutors.

I am beginning to see this myth or something similar to it rebirthed, retold and rehashed.  And I must be honest I have been at times victim to it myself.  It’s a myth that women are only a recent addition to the community and that there needs to be time for adjustment for men.  That the expectations of men have to be moderated down.

You see, I have been reading Helen Merrick’s, The Secret Feminist Cabal which takes a good look at female participation (and all that entails) in the genre of science fiction. You should read it if you want to gain appreciation of a fuller history of SF.

Ask yourself the question – When did women really start participating in Science Fiction?  What’s your perception?

The answer is - from the beginning, certainly the early part of last century, as writers and readers and increasingly as vocal participants in fandom.  But this certainly didn't gel with my original perceptions gained from being a reader, a fan.  It feels to me as if every decade (plucking a figure out of my backside, perhaps generation?), the consciousness of the community seems to reset itself and thus we get the feminism 101 discussions, the mistaken beliefs that only men read SF & F  rehashed. That women who cosplay are fake geek girls. That only boys read comics. That women only came to Doctor Who because of David Tennant.

I think I, and others have been guilty of assuming that our personal male centric view of the SF&F community is reality and owing to a larger culture that doesn’t challenge this we happily continue reinforcing this belief for ourselves and others.

And I think it leads to men in the community letting themselves off the hook.  “This is the way it is because its the way its always been.  But hey things are changing and getting better for women so I don’t have to do much”.

I think its long overdue that men of the science fiction and fantasy community take up the responsibility of challenging what is written and said about women by men of the above opinion(and some are).  Time to stop letting cranky old sexists off the hook because “hey you know this women in SF & F is a new thing and you gotta give people time”.

The buck stops with us.  Let’s accept that we share this genre with women, that their stories are great and always have been.  Let’s expect more from writers and their treatment of women (and other minorities), let’s not always look first to excuse men’s bad habits, with talk of market forces or arguments from history

There are only benefits to this approach.