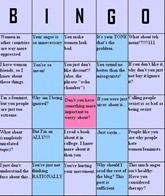 Dmetri Kakmi of Corporate Capital wrote a post on the Australian Women Writers challenge in which I am a participant.  If you are up for it check out the entire post here.  Warning though, if you are past trying to explain feminism 101, give it a miss.

I have posted here due to a blogger glitch that was preventing me from posting at Dmetri’s site.

An interesting post. The cynic in me thinks you might be poking the hornets nest to attract some hits but I’ll take it as read that you are genuine, mind you this technique has worked – I had no idea who you were.

The Australian Women Writers 2012 Book Reading and Reviewing Challenge is on and you are invited to take part — especially if you’re a man.

I am taking part and a quick refresher on the wordpress site doesn’t mention that men should join, the post refers to readers - it’s fairly gender neutral in that respect. The point is to challenge gender bias, which can be largely subconscious. Because it’s subconscious there needs to be a structured and systematic response.

We can’t be too surprised that statistics on the AWW blog pronounce a resounding ‘Yes’. However, a casual glance at the newspapers, magazines, journals and various electronic media I read (and I read very widely indeed) would have you believe the answer is a distinct ‘No’. On the face of it, women appear to be getting as good or as bad an airing as the men.

Now statistics can be misrepresented, there can be errors in collection etc. The statistics quoted carry more weight than your opinion, regardless of your assurances that you do indeed read quite widely, for a couple of reasons. First you are a sample of one and second your selection/memory will be hindered by confirmation bias.

I conducted a gender audit of my reading in March. I was fairly widely read, didn’t care weather the author had dangly bits or not and thought that the split would come out fairly even maybe 60/40 in favour of men – the actual result was 72 /18.

Frankly, when I see a woman who writes clutching a latte at the Moat cafe and bemoaning her sorry state, I want to pull down her muffing top and say: ‘Shut up and go write a good book. That’s all you will be remembered for in the long run.’

You know there is a gender bias bingo card with stock standard response that men and some women come up with when somebody complains about gender inequality? This comes close to ticking one of those boxes. All things being equal yes all anybody has to do is write a damn good book. But things aren’t equal. Women can both write good books and challenge gender inequality. Maybe you need to go to a different coffee shop or slum it.

For me it’s a matter of perspective. If middle-class Australian women, who apparently have the luxury to write a book on their well-charged laptop and not be stoned for their efforts, feel they’re being crushed by the wheels of patriarchy, they should spend a year in Mogadishu. Then they’ll find out what oppression really smells like. And then, maybe, they will appreciate how easy life is for them in our flyblown shores, where they can write to their heart’s content and tour to promote their emulsions. But I suppose in our over-indulged society there is more cache in striking postures of victimhood than getting on with the task at hand.

Another tick box. “Quit your complaining there are people less fortunate than you.” Yes, let forget about gay rights in Australia at least it’s illegal to kill gays here. You could be in Iran.

The first irritant is the verb ‘celebrate’. I don’t mind reading nothing but books written by women for a year — okay, actually, I do. But why does my year of reading have to include public jubilation followed by a goat sacrifice? Why can’t I just sigh contentedly after reading Flannery O’Connor or Fiona McGregor? No, it must be followed by a bacchanal and possibly rending to pieces of at least one male author who finds himself in the wrong place at the wrong time. ‘Celebrate’ stinks of New-Age burbling.

The challenge runs for a year. You have a year to read the books and you can choose the level you want to challenge yourself at. You’re so widely read that you’d probably romp in the lower levels. This is a personal challenge, if you don’t want to celebrate don’t. I mean FFS you’re complaining about striking postures above. The original post at Australian women writers carries none of the bra burning, vagina examining feminist weirdness you are attributing to it.

I bet Peter Carey doesn’t think of himself as a ‘male writer’. His penis doesn’t go near the computer. He merely hopes to transmit universal experience to the reader.

Ignoring that the challenge is about readers and challenging reading behaviour. Peter has privilege.

You are a writer or you are not. Gender doesn’t come into it. If the work is good it will float. If it’s not, it will thankfully sink. That’s all there is.

With readers it quite obviously does. If you or Sonya Hartnett don’t want to be pigeon-holed that’s your prerogative. This is probably the one point that has any merit.

Authors want to be accepted for the quality of the work. Yes, some good work does float to the top but if you or Sonya or any author out there doesn’t think there are barriers that are based on a multitude of biases, subjective opinions - then well let’s just say the evidence doesn’t seem to be in your favour.

The point I think authors need to take to heart is that you must write the best book you can, and consider when apportioning blame for failure whether there are internal reasons rather than external.

One of the AWW’s complaints is that men don’t read women. I’m a man and I read women

Yes sample of one. Pretty sure you can find a person to fit any exception to any rule.

Why not just support the challenge. Women can present just as “authors” without reference to their pink bits, write a good book and challenge inequality all at the same time.

You seem to be casting the challenge authors/ women writers participating in the role of victim playing, wicker burning harpies, who all need to shut up and write a good book. That’s disingenuous to say the least.

The unlucky sod who once called me an ‘ethnic writer’ had to pick himself up off the floor. Another who kindly suggested I take advantage of the fact that I am a ‘gay writer’ discovered that gays hit back — and not just with a handbag.

For the record I usually reserve punching people who are actually physically trying to hurt me. Still I suppose it’s a way of ensuring positive reviews or an assault charge.

The truth is no writer has it easy. At some point, all writers struggle in the face of resounding indifference. Why should women or gays or blacks or people with bucked teeth get preferential treatment?

Missing the point. It’s challenging an observed problem of inequality, it’s voluntary. You missed the 90’s and EEO didn’t you?

Now, woman writer, stop kvetching and write something worth reading. Believe it or not the world is on your side...

They are not complaining(well not in the sense that you are attributing i.e. chronic complaining), and they have written something worthwhile. It’s an entirely positive campaign and still a man has to come in and beat it down with his trouser snake.

The challenge is about levelling the field not giving the women a two goal lead.