Trent kindly managed to crawl half dead from his sick bed to bring you this interview.  Thanks Trent and get well soon.

Thanks, 5 in two years isn't too bad, but I don't think I could keep working at that pace for much longer. That said, I've about five or six different books competing for attention. Which one ends up on top is matter for my back brain - though one is starting to edge the others out, and it's a BIG book.

I'm not contracted for anything new at the moment, which is at once delightful and scary. I think I might actually write a couple of short stories in the next few months. Four years of teaching short story writing kind of bled the joy out of it for me (and made me too self conscious) but I'm getting it back at the moment.

Selling my first story, Threnody to Eidolon - that was such an important moment for me. Editing Redsine, and getting a chance to edit Kirsten Bishop's The Etched City - I love that book - I still think it's one of the best fantasy novels ever published in Australia - and while I don't think I did much to make it better, I learnt so much.

Selling my books, and discovering that I could actually write novels, you know, actually finish them. The Death Works books were so much fun to write, and finally seeing Roil in print was a highlight, too, as was getting to finish the story. I'm still amazed that people have published these stories. You don't often get a chance to live a dream, and I've been lucky enough to do so five times now.

Honestly, if I finish a couple of things I'm working on now and they come out even half as well as I want, I'll be happy.

I'd love to write comics, I've gotten back into the habit of reading them lately, Joe Hill's Locke and Key is amazing, and I love Scott Snyder's American Vampire series.

Whatever I do, I'd like to think I'd still be writing. And, hopefully, getting better at it.

I'd like to think my best work is ahead of me: and that it will surprise me.

I'm still behind in my reading, and if I start mentioning names I'm going to forget someone, and most of my peers are my friends. 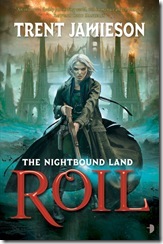 What's impressed me is the sheer quantity of good work being produced, and the wonderful small presses we have. Twelfth Planet, Ticonderoga, ASIM, Aurealis, and that's just scratching the surface. There's a real range and character to our small press scene. And they are publishing books of real merit.

I honestly believe that the small press is the heart of our scene, if it's healthy then writers can grow and develop, and write the brave wonderful things that make good stories. It's an awesome time to be a writer because you know if you sell a story you're going to get some serious editorial input - and that's important. Beyond that it's an awesome time to be a reader of Australian Spec Fic - all tastes are catered for, and catered for so well.

I don't know if there have been big changes to the scene so much. The market has in some ways contracted - there's less bookstores selling Spec Fic - and expanded, there's so many more avenues for publication. I really feel that the e-book exploded last year and we're still dealing with the shrapnel. There's definitely been a couple of years of consolidation in the scene, I don't feel that there was a flagging of energy with publishers after Aussiecon, that instead they've built and continue to build. There's also a sense that we seem to be much more part of the international scene, a lot of writers are making their careers selling internationally rather than locally.

Trent Jamieson is a multiple Aurealis Award winner for short fiction, he has taught short story writing at the Qld University of Technology, and Clarion South.

His Death Works Trilogy is available from Orbit books. Roil, and Night's Engines the two books of the Nightbound Land Duology are available from Angry Robot.

His webpage is at www.trentjamieson.com