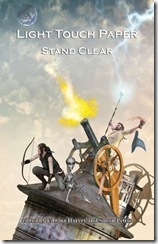 Light Touch Paper Strand Clear published by Peggy Bright Books is an anthology created around the concept of a spark, literal or figurative, of inspiration or of fire.

The anthology title refers to instructions that used to be found on fireworks, and so the authors were given this idea of lighting a touch paper and seeing where the story went.

Now, as with all anthologies there were stories that resonated with me and those that didn’t.  I’ll briefly discuss those that I slaked me thirst for good speculative fiction.

The collection opens with Joanne Anderton’s The Bone Chime Song.  It’s a very good choice, the story - it’s content and execution is indicative of an author on fire; Necromancy, and the love that dare not speak its name.  It’s a magical mood infused police procedural in a sorcerous setting.

He shook his head. “Murder was done to this poor soul. This and at least four others on the edge of the tidal plain, to the west of the city wall. Foul, desecrating murder that twisted their spirits. The Necromancers and I have raised nothing but tortured, gibbering shrouds. But I am Watch, and I will not allow the people of my city to die unknown, unmourned, and unavenged.”

“And so you thought of wind chimes?” I drew my hands away.

“You give song to those whose voices are lost.” Casimir drew his timepiece, but did not look at its hands. It was meant as a conciliatory gesture. I had given it to him twenty years ago, and it had survived separation and war, now marriage and offspring. I did not return the gesture. I had long ago dismantled the one he gave me.

Balancing what is a quite heavy and hard hitting start is the light and playful tone of Sue Bursztynski’s Five ways to start a war.  A collection of perspectives from Greek gods and the humans they victimise around the causes of the Trojan War.  Capricious gods, chest beating heroes and the blame falls on a woman.

They were huge, obviously gods, but when gods think they’re in disguise, you must go along with it.

The man was—Hermes? I thought so. His staff had live snakes on it and he wore a floppy traveller’s hat over his curls. The wings on his sandals flapped gently. One of his companions wore a helmet under her very large hood and carried a spear she was trying to disguise as a staff—Athene, then, had to be. The other two I couldn’t make out under their hooded cloaks, but they would reveal themselves soon enough.

Shooing away the nymph on my knee, I went to greet the gods—er, humble travellers.

Dave Luckett’s History: Theory and Practice had me chuckling to myself –some subtle tongue in cheek commentary in the guise of straight faced sci-fi action adventure.

Thoraiya Dyer’s Faet’s Fire had some disturbing visuals that I am still trying to get out of my mind, alongside a subtle hat tip to current environmental issues. So thanks Thoraiya, I did manage to keep my lunch down.  Whatever you do, don’t go looking for a bit of action in coal seam gas shed – fracking will be the least of your problems.

Ian McHugh’s The Godbreaker and Unggubudh the Mountain, was a surprising piece.  Initially I found it hard to connect with the protagonist, but by the end of what could be possibly a longer tale, the voice of Unggubudh was strong and distinct.  Finnshing the story had me a bit melancholic.

He had looked briefly at the injury in the Godbreaker’s side. The extent and colour of the bruising visible through his sparse fur suggested cracked ribs from a blunt impact—a fall, perhaps, rather than a weapon. He had a number of other, minor wounds that were from weapons. Had the Godbreaker fallen while being pursued? In hindsight, it seemed likely that his fear had not been of Big Ung.

But from what would a Godbreaker run? What was coming behind him? Big Ung’s thoughts went to Marnnonttok and the villagers at Unggubudh’s foot.

Little Ung disappeared beneath the outcrop that sheltered the mouth of their cave.

Inside, Big Ung laid the Godbreaker on the straw sitting mat near the entrance. He pulled aside the Godbreaker’s robe and shucked up his undershirt.

Little Ung hovered at his shoulder. “Is it a Czua?” he asked.

“He is a Godbreaker,” said Big Ung. “What the proper name of his race is, I do not know.” The Godbreaker stirred when Big Ung rolled him onto his uninjured side. Big Ung found the pressure point in his neck and applied a gentle force. The Godbreaker subsided back into unconsciousness.

The collection was rounded out with a lovely piece from Kathleen Jennings who continues to impress with her writing as well as her art.  With Kindling we have a steampunk infused tale, where Jennings weaves present and past deftly and manages to riff off the anthology concept beautifully.

A common cause may start a hundred stories, but to weave them into one took a common enemy. Someone to throw a spanner in the works, to steal the inventions of quarrelling conspirators and spill blood for sleuths to sniff after, to cross the paths of young lovers with those of their pursuers. To tangle the threads, to take advantage of situations. Someone who wasn’t tied into one little story, but could stand up and pull the strings of all of the characters. Someone to elbow out empty places on the map, stir up ghost-eyed dragons, set fire on the high mountains, raise storm clouds, start wars. Someone to take over the world.

Someone to call out a hero.

With a fairly loose theme the anthology can sometimes feel a little disjointed, some works may overshadow others in ways that have nothing to do with their individual quality.

I have picked out a few that tickled my fancy.  I note that in this collection I have tended to pick those tales that fall more in the fantasy rather than science fiction basket.

Is there strength in diversity?

A diverse collection  with something for everyone  means that it may not be seen as outstanding by any particular readership.  My impression is that it holds its own and while it won’t have the punch of a more directly themed collection, it is a collection you could revisit  and  find joy in,  depending on changing mood or taste.  There’s not a piece that I think is padding in other words.

This book was provided to me by the publisher