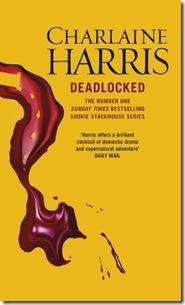 Deadlocked is the latest in the Sookie Stackhouse series (I reviewed the previous book Dead Reckoning here).


The Continuing Adventures of Sookie Stackhouse.

I have made the realisation with this book that this series is not speculative fiction, it’s not paranormal or urban fantasy, it’s domestic drama with a flavouring of the paranormal.1
In this iteration the main plot driver is that Eric, still Sookie’s husband, is framed for murder and it’s up to Sookie to get herself in the thick of things to get him off the hook.

Judging a book by its genre

So coming from the angle that the book isn’t really located in a genre I am familiar with does it hold up?
I have to say no.  I didn’t dislike the book (though there are some very articulate, hard hitting critiques of the whole series and its misogyny and racism). Taken at face value it was a flat read.  I have to ask, if the core of domestic drama is the drama.  Where is it to be found in Deadlocked?
There seemed to be no difference in pacing or tension between Sookie checking her emails or sitting at her kitchen table having a chat while an intruder lies dead at her feet.
Indeed that which has the greatest affect on Sookie is the perceived cheating on her by her vampire husband and the possibility of her loosing him. Even that’s fixed by sitting on the edge of the bathtub for a few seconds of shallow soul searching.
I find that I can only believe Sookie as a character if I consider her to have some sort of borderline personality disorder.

Some of the writing irked me as well.  Stuck inside Sookie’s head the reader is in “conversation” with Sookie the entire book.  Which is why I was tempted to throw the book when Sookie began relaying the contents of her inbox, including how much spam she had and the fact that she deleted it.
When conveying one’s day surely even Sookie knows to cull out the uninteresting bits.
Another doozy was the confession of the baddie to the hardnosed, and nosey Police Detective over the phone.  The dialogue so stilted that it screamed “forced confession” to anyone bar an inebriated monkey (which the writer had established was not the case).  How Sookie could think that the detective would buy it for a second I can not say?


Only for the diehard fans.

In summary, this book hits forty kilometres an hour and stays there the entire time.  If you want to know what happens to Sookie, you’ll no doubt want to get it, but for someone looking for a cheap thrill or an escape I'd look elsewhere - there’s nothing to get your blood rushing or heart thumping.
This book was provided by the publisher.


1.  Hat tip to Gillian Polack for twitter discussion on type of Genre.