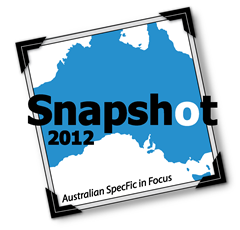 The Aussie Spec Fic Snapshot has taken place three times over the past eight years.

In 2005, Ben Peek spent a frantic week interviewing 43 people in the Australian spec fic scene, and since then, it's grown every time, now taking  a team of interviewers working together to accomplish!

In the lead up to Continuum 8 in Melbourne, we will be blogging interviews for Snapshot 2012 conducted by Alisa Krasnostein, Kathryn Linge, David McDonald, Helen Merrick, Ian Mond, Jason Nahrung, Alex Pierce, Tansy Rayner Roberts, Tehani Wessely and Sean Wright. To read the interviews hot off the press, check these blogs daily from June 1 to June 7, 2012.

As we celebrate the breadth and depth of the Australian spec fic scene,  2012 Snapshot is also a bittersweet time and we take the opportunity to remember two well-loved members of the community who sadly passed away in the past year; Paul Haines and Sara Douglass.