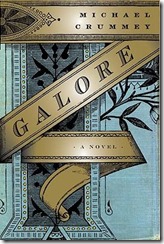 I have friends who are enamoured of this book, I bought it at the Adelaide Writers Festival after hearing Crummey read an excerpt during an interview with Margo Lanagan.

If authors want to sell books, develop some public reading skills and choose your passages wisely.  Crummey reeled me in hook, line and sinker.

He read (in a faint Newfoundland accent if I recall) a selection of pages from near the beginning of the novel; a  dying whale washes up on the shore and the townsfolk set about harvesting it.   Cutting it open they discover the body of a naked man, determined to give him a Christian burial…

Mary Tryphena’s father lifted the corpse by the armpits while James Woundy took the legs and the sorry little funeral train began its slow march up off the landwash. There were three stone steps at the head of the beach, the dead man’s torso folding awkwardly on itself as they negotiated the rise and a foul rainbow sprayed from the bowels. James Woundy jumped away from the mess, dropping the body against the rocks. —Jesus, jesus, jesus, he said, his face gone nearly as white as the corpse. Callum tried to talk him into grabbing hold again but he refused. —If he’s alive enough to shit, James Woundy said, he’s alive enough to walk.

It has taken me about two years to get around to reading it though, plenty of time hopefully to let the praise settle, to let the initial excitement fade.  It’s a prize winning book but I wanted to approach it as cleanly as possible.

So what is Galore?

It’s a story of people and place, the families Devine & Sellers chiefly and the community and locale of Paradise Deep, Newfoundland.

So it has elements of a family saga set in a remote and bleak locale, in a time of changing attitudes and mores.  Not perhaps a book that you want to read if you are searching for an uplifting experience.

In terms of narrative fulfilment I was left feeling a little unsatisfied at the end of what seemed like a long tale.  The nature of the book, its focus on family members over the period of a couple of generations made it hard to really form strong attachments to characters. That and a lot of the characters were not particularly likeable. They live a bleak and oppressed existence on the edge of starvation for much of the book.

Still that being said, it was an immersive experience, the characters were tangible, the place and tone bleak and depressing in a thoroughly enjoyable way.  I was absorbed.

There are elements of magical realism, ghosts and shades that are interacted which I found no objection to, having come largely from a fantasy/science fiction background, there’s also an echo of biblical allusion – a family member cut from the belly of a whale and called Jonah.

You may note too from the excerpt above that Crummey eschews the use of quotation/speech marks using a dash instead.  It was an interesting choice, but didn’t really cause any issues once I got used to it.

It’s been compared by some to The Shipping News and tonally I’d say they were similar, neither perhaps an advertisement for Newfoundland but they are both very distinct in their representation of people and place.

I enjoyed Crummey’s writing enough that I’d pick up another work of his. 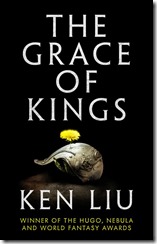