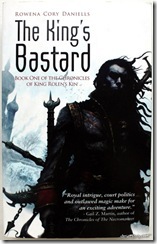 Please welcome Rowena Cory Daniells as the first interviewee in my selection of authors for the  2012 Australian Speculative Fiction Snapshot.  Rowena was kind enough to take time out of her very bust writing schedule to answer my questions.

It has taken over my life! No, seriously, it has. When this project is all handed in I am going to spend some time with my family.

The Outcast Chronicles had been brewing for more than ten years. A draft of this went to the very first ROR back in 2001. The question behind the series is: 'What would really happen, if people with magical abilities lived amongst us?' And from there a whole world complete with drama, intrigue and betrayal came to life.

Wow, I'm not ninety yet. I'd like to think I'll achieve a lot more. So far... I'm glad to see the Vision Writing Group going from strength to strength. And I’ve found the ROR writing group a life-saver over the years.

I have such a backlog of books already written. They push the boundaries of the fantasy genre, but my publishers tend to like traditional fantasy, so I’ll have to see.

Meanwhile, there is the paranormal-crime (no vampires) The Price of Fame, which is coming out this year. I find a lot of the writers I interview write both crime and fantasy (and some add historical to this mix). I think you need a certain type of mind to research and build the complex worlds required for these genres. (Even writing historical books requires world building, because that world doesn’t exist anymore).

I must admit that since November last year I have had my head down, writing madly. I’ve read Cochrane, The Life and Exploits of a Fighting Captain, which is the biography of the real life sea captain that Patrick O’Brian’s Jack Aubrey is based on.

I re-read The West Point Military History Series: Ancient and Medieval Warfare, which is an analysis of great battles and the leaders who fought them. And I’ve read the books that the ROR team put in for feedback. So I know some interesting work is going to be coming from them in the near future.

I must admit that I have been working part-time/full-time so I haven’t had much time to do anything other than write and work (and renovate. Don’t me get started on renovating!).

I’ve really been enjoying Twitter because of the fascinating links. And I’m on an Aussie Spec Fic Women’s list which is interesting because they are all such intelligent, challenging women.

In the last two years, I think blogs have really come into their own. It’s been a great way for me to keep in touch with readers and see what other authors are up to. Plus the publishing industry is changing so rapidly, I’ve found the discussion on the blogs really informative.

Rowena Cory Daniells, best selling author of the trilogy King Rolen’s Kin, sets out to write the kind of books that you curl up with on a rainy Saturday afternoon. Her new fantasy trilogy, The Outcast Chronicles, will be released in 2012. Her paranormal-crime (no vampires) The Price of Fame will also be released in 2012.