I decided to let Amanda and Kylie introduce themselves.  Humble thanks to the both of them for their time:

A.K. Wrox is variously known as Kylie Fox, Amanda Wrangles, Mum, Hey You or – most commonly – That Evil Wench.

Both halves of A.K. reside on a beautiful peninsula in southern Australia with their partners, gaggles of children and a dog or three.
Neither of them own bunnies. 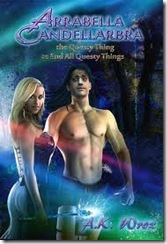 Arrabella is what happens when two “favourite friends” have a few drinks and decide they need to write something fun to get their creative juices flowing for their more serious work. In one such night we decided that high fantasy would be fun to write if we could double every cliché of the genre, add in some triple entendres and pay homage to all our favourite books and movies and songs.

It is, above all else, a fairy tale, very much for adults. There is, naturally, a quest, a warrior heroine, a beast master, a fairy, a wizard and every other creature one would expect to find in fantasy – and then some. The book was described by one person as the love-child of Terry Pratchett and Monty Python. Obviously, we’d never assume to put ourselves in the same category as either one but the sentiment behind it holds true.

Arrabella was a lot of fun to write and (hopefully) as much fun to read.
And we’re pretty sure it’s the first – and maybe only – book to be written entirely on a private Facebook page!

Amanda: Two short stories spring immediately to mind. One, of course, is Persia Bloom, winner of the Scarlet Stiletto short story comp. I was very much a newbie; Persia was the first story I’d entered or submitted anywhere and winning the award was the moment the made me realise I could (maybe) actually ‘do this’ writing thing.

A hairdresser with wicked ways and special gifts, Persia is a character that arrived fully formed and has never left me. I’m looking forward to hanging out with Persia some more and giving her some novel-length adventures in the near future. The story is published in The Second Cut.

The other story is ‘Annie at the Beach’. It was written for the same competition, a year later, in the fortnight after my father died and managed a shortlisting. Although it didn’t meet with the same success as Persia (special commendation), and since been reworked from being straight crime into spec fic; it’s the story I’m most proud of. It was an extremely emotional time, which plays out in a pretty graphic manner in the story. Hopefully, I’ll find a home for Annie soon.

Kylie: For me, every time I get to type those magic words “the end” it’s my new proudest moment. Starting stories is always the easy part, there never seems to be any end to new ideas, but the sense of achievement to see a story to its conclusion is amazing.

My short story in verse “Poppies” is something I’m immensely proud of, not just because it earned me some recognition in winning the Dorothy Porter award but, more importantly, because it was a story I tried to write several times but couldn’t quite get right. I finally gave into myself and wrote it in verse, not entirely sure that I was capable of doing that, and it worked.

I’ve also completed a full-length solo novel which still astounds me. So many times I nearly gave up and killed off all my characters but I persevered and got there. And I still like my assassin, Kat Delaney, we managed to stay friends to the end! I’m hoping the sense of pride will still be there when I’ve finished reworking and editing her story.

Amanda: Yes, there is most definitely another Arrabella in the works to be released later this year. In fact, we’re contracted for at least another two in the series, with talk of a fourth.

In my own, separate world from Kylie (is there really one of those? An alternate universe maybe?) I’ve been working on the same novel for a couple of years now, along with numerous shorts, one of which will be published in a crime anthology this year. My novel – Morgan’s Dust - is aimed at the older end of the YA market, and the story of a girl who lives in a funeral home with a (big) difference. This one is definitely following my first love of pure Spec Fic, filled with all kinds of new beasties; a full world and mythology build. Luckily, I’ve recently had the amazing Alison Goodman mentoring me through the process as the end finally looms near.

Kylie:  As Amanda said, we’re most definitely working on the continuing saga of Arrabella and her friends and yes, we’re always working on something new of our own too.

My novel, currently titled Kataclysmic but to be renamed, starring Kat Delaney that I mentioned above, is in the redraft stage. I’m also working on a not-quite-zombie novella, a couple of short stories and a YA urban fantasy.

Amanda: Ahh, do I really have to choose?

Well, of course Marianne de Pierres is big on my list of favourites. Her Night Creatures series is rich, dark and graphic – all the things I love in YA spec fic. Kirstyn McDermott’s Madigan Mine blew me away with serious word envy, the same with Alison Goodman’s EON and EONA. I’ve been a bit slow and only recently discovered Margo Lanagan; Sea Hearts is to die for. Jo Anderton, Kim Westwood, A.K. Bedford, L.L. Hannett and Karen Brooks have also left me wanting more of their work – now.

Kylie:  Amazingly enough (or not!) I totally agree with everything Amanda just said. Madigan Mine was one of the most exquisitely written books I’ve ever read – the mood that Kirstyn McDermott managed to create and maintain throughout to the book was incredible.

Alison Goodman’s Eon and Eona are absolute perfection. Marianne’s Night Creatures are deep and rich and the epitome of world building.
KA Bedford’s Time Machines Repaired While You Wait, is one of very few time-travel books that have really hit the mark for me – brilliant!
Also, Jason Nahrung, Angela Slatter, Tracie McBride, Felicity Dowker and Andrew McKiernan have really impressed me.

The anthologies, Macabre and Dead Red Heart were choc-full of wordy-goodness – not just enough to sit up and take notice but jump up from my seat cheering!

Amanda:  Well, quite honestly, at the time of Aussiecon 4, we were absolute newbies to the scene, and attended the con purely as fans. For me, it was an experience of a lifetime, not having attended a big con before. I loved the feeling of finding so many like-minded people, and so much information to the craft in one place.

I guess so far as changes go – the Australian Spec Fic scene just gets bigger and better; it’s very exciting. We have such an amazing pool of talent in this country, and so many friendly people willing to help out and give advice to new writers.  As a reviewer, I’ve read almost exclusively Australian authors over the last couple of years, and I’m constantly blown-away by the standard of our authors.

Kylie:  Once again, Amanda has beaten me to it but she’s absolutely right. Everything about the scene seems new to me since Aussiecon, in large part because I feel like I’m far more in touch with it now than I was then.

One of the things I’ve noticed is how much more accessible work is now – there seems to be a lot more opportunities available for Aussie SpecFic writers with anthologies and several new small presses readily publishing. Hopefully that will only continue to grow and the works of these talented people can keep finding new readerships. 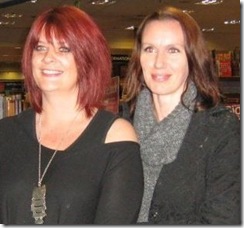 Amanda Wrangles writes Speculative Fiction and Crime – usually in the same story. She grew up on a steady diet of fantasy and horror and encouraged to read under the blankets by torchlight well after the time most good children were fast asleep. These days, she tries to pretend not to notice when one of her three sons does the same thing.

Amanda was the winner of the 2009 Scarlet Stiletto short story competition with a spec fic story disguised as crime. She shortlisted in the same competition in 2010 and 2011. This year, she’s given up entering, becoming a judge instead. She reviews YA Spec Fic, paranormal crime and SciFi for author Marianne de Pierres’ various websites.

Kylie spends her days caring for her four younger children (and growing a fifth!) and her nights plotting murder, revenge and espionage; and creating worlds far away from her own.

Kylie always knew that she wanted to be a writer but thought that “real” authors were mythical creatures living in far-away crystalline towers. Once she discovered that authors were real people, she set to work doing the only thing she could – writing.

Kylie was the winner of the Dorothy Porter award at the 2010 Scarlet Stiletto Awards for her short story in verse, “Poppies” which is now published in the anthology, The Second Cut.

Her first novel, written with Amanda Wrangles, under the pseudonym, A.K. Wrox, is Arrabella Candellarbra and the Questy Thing to End All Questy Things, published by Clan Destine Press.

Kylie is currently rewriting a crime thriller starring Melbourne-based, kick-arse heroine and government-sanctioned assassin, Kat Delaney. She is also working on a YA paranormal novel; an apocalyptic horror novel and several short stories across genres.

In her spare time, (ha!) she manages Marianne Delacourt’s (aka Marianne de Pierres) Tara Sharp site and reviews across her other websites, along with several other online publications and sites.