or part three if you prefer.

Day 2 of the convention dawned with a light drizzle.  My headache had departed along with any chance of getting breakfast before rushing off to the con.

I managed to make it to the con just as Take the pebble from my hand, a panel on mentoring for writers was beginning.  It was both an interesting panel to listen to, featuring three mentors and one mentee, and packed with some good resources. 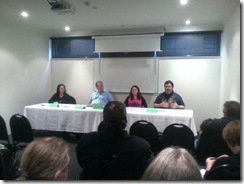 Next I attended the Masters of Podcasting (an interesting title considering that two of the panellists were female members of some of the most popular Australian specfic podcasts).

Terry Frost of Paleo-Cinema podcast declared that fanzines were dead as a large part of Fandom.  Jonathan Strahan then went on to say that the podcast was the lazy persons(perhaps time challenged) fanzine.

Much talk was had on the ease of production, distribution and consumption of podcasts i.e. Jonathan rolls out of bed conducts a structured ramble with Gary K Wolfe, uploads without editing and it’s done.  Listeners then download and listen to it while they exercise/drive/do chores – a process that takes a fraction of time for all parties concerned, compared to the production and consumption of fanzines.

Next was Fans & Faith which was “advertised” as Religion often frowns upon science fiction…how do the panellists reconcile their passion with their faith.  It turned out to be more about how panellists felt isolated or misleadingly portrayed by the science fiction community. Either way, as a an atheist it was interesting to observe.

There were a couple of times I winced as comments were directed at atheists but for the most part it was good discussion – I attended in the spirit of understanding.  Ian Mond made some excellent points about the portrayal of Jewish and Islamic characters, the specifics of which elude me now.

There was some heated discussion when an audience member raised a badly framed question about the scientific method being antithetical to religion.  He framed it badly and the panel was defensive, which was a pity because I think it gets to the crux of the matter.  How do the scientifically minded religious deal with doctrinal/dogmatic interference in science.

The minister sitting on the panel seemed a bit blinded in her appreciation for the power religion held in chilling science when it’s ethically dubious, but not when it might hold up advances that are beneficial i.e. eugenics versus say birth control.

I wanted to ask the panel if they saw Christianity as a solid cohesive belief structure(it’s not in my experience - there are some 3000 Christian sects) and saw attacks or misrepresentations as an attack on all Christians or an attack on a particular type?  Is there a tendency to close ranks, in other words?

All in all though a good talk that got me thinking.

After introducing myself to the Ditmar Winning Ian Mond I hightailed it over to the Galactic Suburbia live podcast (mentioned here).

Wanting to support some of the new and old talent that had been published in Fablecroft’s Epilogue I arrived to a rather empty room to hear David McDonald, Steve Cameron, Jo Anderton and Dirk Flinthart read.  I was the only audience member so we adjourned to the Bar.  I still got all their signatures though.

From then on I was involved in helping Twelfth Planet Press carry stuff down to the Writer & The Critic recording at my friend Warren’s bookstore – Embiggen Books.  The result of which you can listen to here.

From then on it was a quick drink at The Moat followed by a Greek restaurant for dinner.

And somehow I ended up back at the Convention bar and had the good fortune to listen wide-eyed as Jonathan Strahan and Robin M Pen held an informal panel on Australian Sci-Fi with me as the only audience member.