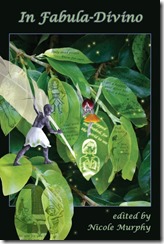 In Fabula-divino is one of those projects that seemed to fly under my radar, despite being aware of and following many of the authors, the editor and publisher of the project.  I’ll let the Editor, Nicole Murphy explain the concept in her own words:

In March 2009, author and editor Nicole Murphy began the In Fabula-divino project – the aim being to provide up-and-coming authors with their first taste of a professional editing experience, mentor them through the ups and downs of a writing career and give a leg up to some talented writers.

The first few months were crowdfunded via Indiegogo. The first four stories were turned around in just three weeks, undergoing at least three rounds of editing in that time. The later stories were edited over a two month period.

Each story was published online, available for a month here on this very website, before it was replaced by the next fabulous story.

The anthology was made available in electronic form and despite all the poor luck it had to confront getting there, a paperback version was launched over this past weekend at the Australian Natcon.

But you want to know about the stories don’t you?

I wasn’t a big fan of anthology’s or a big reader of short stories before I became a reviewer, so the last two years has been a bit of an education in reading the shorter form and getting the feel of how anthologies work and what defines a good one.  No anthology is going to be 100% everybody’s thing, it’s the nature of getting a large number of writers together and building something cohesive but that still allows individuality.

In Fabula-divino lacks a unifying theme, but it’s a slim read so I didn’t feel that it impacted on my reading experience.  What Murphy has done is given us a sprinkling of reprints and original works (all we new to me) from well known authors of speculative fiction interspersed with some well work-shopped and edited work from new or up and coming authors.  It was a quick, satisfying read with some excellent work from new and seasoned writers alike.

From the seasoned writers, I was emotionally gutted by Kaaron Warren’s White Bed (her first published story if I’m not mistaken)- I should know by now what to expect from Kaaron, but this story is a prime example of why she picks up awards for her writing.  The second seasoned writer story that made an impact was Angela Slatter’s Dresses, Three, a fairy tale retelling.

Of the new writers SG Larner would have tied with Slatter for the story with the most emotional impact with her Regret, had the Warren not been included in the collection.  It’s a really good example of the kind of speculative fiction that easily straddles the boundary between fantasy and magical realism i.e. it would not have been out of place in a Lit Journal.

Stay Out of the Park by Janett L Grady was another story that I felt mixed emotion, horror and hope in any interesting fashion.  Finally I was kicking myself for not seeing the reveal in Holy Kench’s Zombie story, The Secret Life of a Zombie Fan, having been exposed to her unique fiction via her blog.

In Fabula-Divino is a mixed bag in the best sense of the word, a selection of good (some great) short stories, there’s no liquorice in this bag of lolliesY.

In Fabula-divino was published by eMergeant Publishing in partnership with Nicole Murphy and can be purchased through Amazon and Smashwords in electronic form. A review copy was provided for this review.

YI used to hate liquorice as a kid, and dreaded finding liquorice in bags of mixed candy.  I have come to appreciate it especially in Sambucca form.