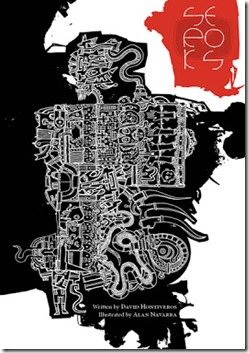 In 2002 David Hontiveros won second prize in Carlos Palanca Memorial Awards- Futuristic Fiction Category for his short story titled Kaming Mga Seroks.  That piece forms the first story in this collection.  I say collection but Seroks is a tightly structured series of stories, so tightly linked that I am inclined to call it a mosaic novella.

Through a number of forms and perspectives Hontiveros gives us a far future Philippines run by an almost omnipresent Maharlika Company, a world where the Chinese are the dominant force and the United States was bought out in the aftermath of a gene based attack on the male section of the populace leaving them mostly sterile.

If you are a fan of old school Gibsonian Cyberpunk you’ll feel a tingling of familiarity.  Hontiveros, however, drags in some other ideas and influences that give this mosaic a fresh feel -there’s some Superhero DNA, the history of Filipino film is alluded to, and the occurrence of piracy is extrapolated past the point of software and cd’s.

Imagine a world with clones, imagine that film studios can clone actors and have the duplicates or Seroks (took me half the book to realize that Seroks =  Xerox and that it roughly translates to Copies) stand in for them.  Imagine then that these clones or the templates that are used to create them can be pirated.  We have a world that’s ripe for abuse.  We have a world where Seroks, who are for all intents and purposes human, don’t have human rights.

The mosaic follows the fortunes of a group or Seroks owned by aging Filipino movie star and disgraced President Frederico Rubio.  The Seroks are all grown to look like the aging star at the different stages in his movie career, some engineered to be the characters and not merely the actor playing the character.

Seroks is part thriller, part comment on corporate greed, part superhero story.  I love the diversity of writing form that Hontiveros brings to the work; first person point of view, television script, a couple of the pieces described almost in terms of stage directions. It comes as no surprise to me that he writes the Supehero comic series Bathala as I feel he has a very good handle on imagery and conveying that to the reader.

As a first Iteration, a part one, Seroks, does a very good job of laying down a firm foundation and giving the reader some action and resolution.  The world building is fresh and tangible and I think that Hontiveros has played it well; giving us just enough to feel immersed and temporarily satisfied.  I await further iterations. Don’t leave us waiting too long Mr Hontiveros.

The artwork is provided by Alan Navara - the cover and internal story separators. I think he and Visprint should be commended for rounding out the work with high spec. production and simple but striking artwork.

And thanks to Charles Tan for facilitating access to this work.