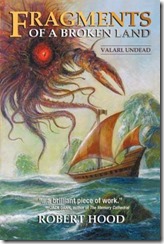 What do you get when “Australia’s Master of Dark Fantasy” sets out to write a debut adult fantasy novel?  Not Granddad's, journey through Middle Earth, that’s for sure.

I have read Robert Hood’s work before but short fiction is obviously different to the novel form, so I didn’t have any firm convictions going in – possibly the best way to approach a book really.

Other reviewers have compared Fragments of a Broken Land to that branch of the fantasy tree inhabited by Moorcock, Lieber and Vance. I know of these writers but have only ever played games that use them as a source material ( I’ll hand in my Fantasy Fan Union Card after this review).

So for the general fantasy reader, bereft of the esoteric knowledge bestowed on readers of Elric and Fafhrd what do you get? A world that is deceptively rich for one that exists only as a “solid firmament”.  Hood manages to evoke a sense of long history, a passage of time and an exoticism that doesn’t rely on orientalism.  It’s more sorcery than sword with a definite emphasis on the workings, metaphysics and consequences of manipulating “deep powers”.

In a place where no stars appear in the night sky, a group of strangers whose ancestries reach back to an earlier apocalyptic disaster are brought together to track down a resurrected corpse that might hold the key to the End of the World.

Structurally we have two stories, one that is a fairly straight forward fantasy quest, shadowed by the other which deals with the metaphysics, the unseen forces that impact on the first.  We have characters that exist in both stories and that are aware, though not always fully, of the existence of two differing realities.

Fragments of a Broken Land will take an investment of your time and attention.  This is not a book that you will want to devour.  It will exercise your brains as you hold these two storylines and attempt to figure their conclusion before the main character does.  It’s the mystery that pulls you through the book, the desire to know how Hood can pull the story, the world, together.

Initially I found the dual storyline and the shared characters a work out, but I think the structure of the book emulates the state of confusion the main character is experiencing.  As the book progressed both I and the character seemed to get our head around things.  On reflection then, I feel the structure was well done.

Another thing I enjoyed was the use of poetry and song.  It’s a brave author that attempts these forms within a story.  Some readers will skip over them(why this is I am not sure) and  you have to have both skill and knowledge of poetic forms in addition to being able to place them in a fantasy setting and make them “sound” natural. So kudos to Hood for doing so.

Fragments of a Broken Land is a rich, thought provoking fantasy read with elements of horror.  It’s a book that requires some fantasy grounding and possibly a mature reading experience to fully enjoy ie you don’t get annoyed when things aren’t handed to you on a plate.