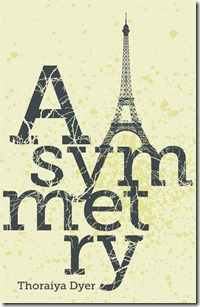 Asymmetry is the latest of the top shelf Twelve Planets series to emerge from Twelve Planet Press.  It continues what I have found to be an outstanding showcase of Australian women writers in the speculative fiction field.

Thoraiya has been well supported by the team at Twelfth Planet Press for some time; she appeared in the anthologies, New Ceres Nights and Sprawl(her short, Yowie, won an Aurealis), had a novella, The Company Articles of Edward Teach (which won the Ditmar Novella Category in 2011) published as part of a double with Matthew Chrulew and now she’s produced Asymmetry.  Thoraiya also picked up a Ditmar this year for her The Wisdom of Ants published published in Clarkesworld.

So as you would expect this collection of shorts is worthy of someone who is generating a lot of good work.  There’s four stories, that showcase Thoraiya’s versatility within the genre and I would be stretched to find a less than brilliant one amongst them:

I fell into After Hours, a story of a young vet attached to a practice that has a special relationship with the nearby military base. They house and train “special” dogs.  It’s a sign of very good writing that a novel, let alone a short can draw you in and immerse you when you are tired. I had a distinct yearning for more of the interesting the world and characters Thoraiya has delivered here.  Very smooth and subtle writing, great characterization and a tantalizing idea. It’s hard to pull off a werewolf tale and make it fresh but Thoraiya does.

Zadie, Scythe of the West, could not be further from the setting of After Hours.  Thoraiya gives us a female dominated warrior society where to participate in battle a woman must have given birth for every life she takes.  This set up is not as desirous as some might think though and the emotional core of this story comes from the tension that this society creates around relationships and that despite having to give a life before you take one, war and killing is still horrendous and perhaps unjustified.  This short could I think spawn an entirely original Dark Fantasy series if Thoraiya were so inclined.

Wish Me Luck somehow manages to fuse a  steampunk-ish future with trans-dimensional travel where you pay your way with physically manifesting luck. It felt very Final Fantasy to me a fusion of science and magic, with pseudo-victorian trappings. Again entirely different to the preceding stories.

And rounding out the quartet is Seven Days in Paris, which is partly about counter terrorism and partly about human cloning.  It raises questions about the acceleration of organisms (tips its hat toward current issues on GMO) and what boundaries governments will cross when they think it necessary to save lives.  Somewhat evocative of the questions raised by Blade Runner.

I would be very surprised if this weren’t on the awards list next year.  The only regret I have after reading it was that it was so easily consumed. For a collection that is thematically about imbalance, Twelfth Planet Press has produced one of the most balanced collections I have come across in recent times.

Kudos to Amanda Rainey for cover design and Charles A. Tan for the eBook layout.

This review copy was made available by the publisher at no cost.