Probably the only section that I have 100% coverage of.  First up 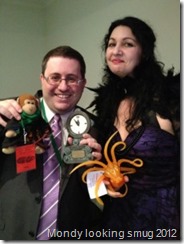 I thought I would do a quick comparison between last years nominees and this years.  So last year we had:

Best Fan Publication in Any Medium 2012

As to the nominated publications, they all provide something different( this feature of Australian podcasting has been noted by Chrales  Tan if memory serves me correctly)which makes the process of comparing/judging them particularly hard.

The Writer and the Critic features two very intelligent commentators (money, brown paper bag, usual spot) who consistently bring us quality in-depth discussion on a select range of speculative fiction.  You don’t really get this level of attention or quality commentary outside of dedicated book shows and I get the distinct impression that apart from and even more select range of authors there’s a bit of a looking down ones nose at speculative fiction from the various  mainstream media outlets.

Galactic Suburbia - relaxed conversational feminist commentary on the field.  I credit them with making changes to my reading habits.  Their mostly laid back conversational style of talking about women’s issues slips under the knee jerk, defensive reaction of men unaccustomed to the idea that women have had and continue to play an important role in the conversation on speculative fiction.

Antipodean SF – A stalwart of the community, run by Ion Newcombe who I have yet not had the pleasure to meet.  Mark Webb has some very kind things to say about this entry:

Thirdly, Antipodean SF (who published a few of my flash fiction pieces last year) are up for best fan publication in the Ditmars. It is amazing how many established writers I talk to who say “Oh, yes – Antipodean SF is where I got my first story published”. Ion Newcombe is an excellent editor and generous contributor to the Australian speculative fiction scene. If you’ve never seen Antipodean SF, I’d encourage you to check the site out [source]

The Coode Street Podcast – the Statler and Waldorf of podcasting, not meaning to imply that they are muppets, but rather they represent commentary from an earlier era and they may be a little old-fartish, prone to the occasional ramble.  This show is like a bar side seat at a convention, a must listen.

Snapshot 2012 – a massive snapshot of the Australian Speculative Fiction scene, involving some 10 interviewers conducting 157 interviews.  You can see the Index here. Hosted on the ASIF website.

Australian Speculative Fiction in Focus – a comprehensive collection of interviews and reviews of Australian fiction.  It ended this year and there’s not been something com along to replace it.

Galactic Chat – a one on one interview podcast showcasing mostly local author talent an with a weighting towards interviewing female writers.  That being said they did interview Lord Grimdark or should that be The Prince of Grim Darkness - Joe Abercrombie.

Honestly I don’t know who’s going to take out this award.  It’s good to see that written works, The Snapshot and Antipodean fly the flag for the typed word.  To me they all contribute, if any of them take home a trophy I am happy. So unless there’s a revolt and the no award is selected I forsee contentedness in my future.