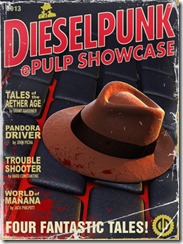 I think I enjoyed Dieselpunk before I was even aware of the genre tag or that of its more prevalent cousin Steampunk.  I can remember playing the tabletop version of Crimson Skies (the original, with the cardboard press out game pieces).  So coming into this collection I had an expectation of something similar.  "That Sort of World: a Tale of the Aether Age" by Grant Gardiner certainly didn’t disappoint on that front- indeed it felt like a Crimson Skies story.  I enjoyed the genre markers: gangsters, speakeasies, spies and Grant employed some subtle humour to good effect.

Who are the People in your Neighborhood?" by John Picha, I thought had a good shot at mixing social comment with pulp action.  It felt more 30’s vigilante superhero than my concept of Dieselpunk and there was some interesting use of tense that jarred me out of the story.

"The Wise Man Says" by Bard Constantine was hardboiled detective fiction in a dystopic future earth.  It felt a bit like Dark City without the aliens.  It was well done genre writing but the futuristic setting didn’t quite convince me. It would have been none too different a story without the science fictional markers.

"Friend of the Spirits" by Jack Philpott showed the broadest range in what could be called “Dieselpunk”, but it struck me as more fantasy than Dieselpunk for some reason – not enough Art Deco perhaps.  All in all it was original even if it didn’t quiet fog up my aviator glasses.

So.  It’s a showcase and it certainly displays a broad range of what an author might be able to do in the sub-genre.  For my personal tastes though I am more a Sky Pirates kinda guy, battling Nazi’s on the back of giant Zeppelins. So I’d say I liked some aspects of the showcase more than others but it’s worth a look if you have the time.

This ebook was provided free of charge