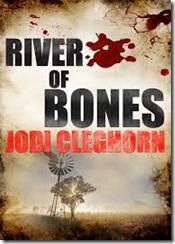 River of Bones was previously published by the Australian Review of Fiction under the title of Elyora, the name of the town featured in the novella.  I read it back in January and by a stroke of good fortune happened to read Dr Lisa L Hannett’s article, Wide Open Fear: Australian Horror and Gothic Fiction at the same time.  Hannett introduced me to the concept of unheimlich, a term that roughly translates to an object, situation or place that has a quality of being familiar yet foreign at the same time.

The term describes River of Bones perfectly.  The setting is familiar, yet strange and Cleghorn presents a story that straddles the borderline between the everyday, the mundane and the disturbing.  She presents an Australian landscape and characters that I know and manages to embed a “wrongness”, a fractured reality that builds until the true horror is revealed.

Australia is the sort of country where a wrong turn can kill you, either the people, the animals or the environment.  The initial opening of the tale ( a short prologue was added with the new edition) starts off with a band in their combi-van traveling an outback road to a gig.  Most Australian’s have that experience of the road trip, of turning off into towns bypassed by the highway, of taking shortcuts that turnout to be long-ways-around.  Elyora could be anyone of a hundred once-were-towns in my state.

Jo, Benny and Hal, members of the band Faunabate, have no idea what they’re in for when their car suddenly breaks down on the way to their first gig.
Their nearest town? Elyora. Upon arrival it quickly becomes clear that this is not your normal town. Why are all the magazines dated at 1974?
Why have all of their clocks stopped? And where exactly have all the people gone?There are some towns you don't ever want to visit.

And Elyora is one of them.

I have become a fan of Stephen King in recent years, more so for the emotional weight he embeds in his focus on character -I was more torn up over the love story in 22.11.63 than the Kennedy story. Though he does take a long time getting there.  With River of Bones Cleghorn somehow manages to deliver that same weight, that same investment in character that I feel with King, but without such a long run-up.  I would have been fine with just the emotional interplay, the tragedy in this novella, but Cleghorn delivered a double punch of emotional and very deftly placed, visceral horror.  The ending was particularly gutting with respect to both.

Cleghorn’s rendering of Elyora and its inhabitants is so vivid that I see possibilities for it as an independent horror film in much the same vein as Wolf Creek. Hannett did not quote River of Bones as being part of the tradition of Australian Gothic ( she probably hadn’t read it at the time) but it strikes me as one of the better recent examples.