Tara Sharp gets a make over 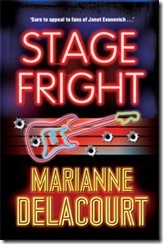 Marianne Delacourt is the pseudonym of speculative fiction author Marianne de Pierres.  Marianne writes the Tara Sharp series under that name and with the third in that series, Stage Fright released later this year, the website has undergone a makeover.

The Tara Sharp books can be best described as humourous crime with a paranormal flavour. The series will be ongoing, featuring the same cast of characters, though each book will be a stand alone adventure mystery.

Comparison’s have been drawn with Janet Evanovich’s wonderful Stephanie Plum novels (of which Marianne is a big fan), and readers of that series will find appealing similarities. But while they are definitely of the same genre, there are some key differences. To begin with, Mariann’e books are set in Australia. Most significantly though, Tara is Tara – not Stephanie! She’s a different type of girl.

Please pop over and let Marianne know what you think.