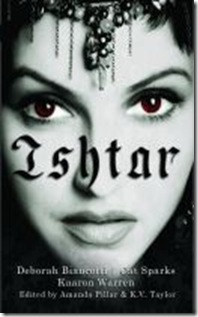 Ishtar is a collection of novella’s written by three of Australia’s top female speculative fiction writers.

Indeed, the collection itself has been nominated for both an Aurealis and a Ditmar, and the individual novellas have picked up nominations in both awards as well.

Published by Gilgamesh press 1. for the rather paltry sum of $5.95 in ebook form, it’s well worth the money.

The stories in Ishtar, as the title suggests, centre on the Assyrian Goddess Ishtar, goddess of fertility, war, love, and sex.

The first novella, The Five Loves of Ishtar by Kaaron Warren is set in Ancient Assyria.  The story is told by successive generations of washer women indentured to the Goddess as she is wife or partner to 5 great men, beginning with the deity Tammuz.

The story is written in the first person, and the language is somewhat stilted (though not in a negative sense).  I think Warren is trying to create a text that feels mythic and reserved, not quite biblical but certainly encouraging more formal tone:

My goddess Ishtar had five great loves in her thousand years of living. Many lovers; so many even I lost count, I, who can tell you the number of girdles in every household in the city. But five men she loved, and five times she risked all for love.

I’ll admit that this tale took me the longest to get into.  The repetition of the form , however, the continuity of generations of washer women telling the story, gave me both a sense of history and gradually drew me in.

The second novella was Deb Biancotti’s And the Dead Shall Outnumber The Living and is set in present day Sydney. It’s a police procedural  that morphs into a surreal dark fantasy where the goddess Ishtar appears again, flexing her powers.

She crouches and grips the edge of a drain outlet, peering in. The stench is unbearable. Every shitting, vomiting junkie in the city crammed into one room couldn’t smell this bad. The body looks like a sack pushed up against the grate, spread out, blocking nearly the whole outlet. Water rushes around it, making the skin ripple. It’s naked, and the dark hairs on its chest and arms and legs, the dark V of hair around its genitals, are pressed flat by the weight of water. The insides must’ve floated away by now, out to sea.

“Kids thought it was a balloon or a clown suit or something,” Tarling says. “Until the face rolled round and looked at them.”

I am a fan of Biancotti’s work in Bad Power and the writing echoes that same beat cop, police procedural with an edge of dark fantasy, only in this instance it’s more than an edge.  The ending is…unconventional perhaps, but fits into the whole package beautifully.

The final novella is Cat Sparks’ The Sleeping and The Dead. It gave me visions of a post apocalyptic gothic wasteland - Necromaidens with a fetish for skulls…

She watches nuns dancing in the dust, spinning and twirling as if the stuff’s not killing them. Necromaidens. Fallout wraiths. Praising absent gods for their blisters as well as their dreams. Like her, they have no formal training. Their cult has grown organically, exponentially as the years have dragged. Anna became conscious of the neatness of the skulls long before glimpsing the girls’ demented Tinkerbell antics around the gritty edges of Truckstop’s barbed perimeter. She might have dismissed the girls as ghosts — the barren landscape groans beneath the breathless, phantom weight of them, but no, the nuns are solid. As solid as forty-five kilos of half-starved girl can get.

To pick a favourite

It’s hard to pick a favourite out of these three, viewed as three parts of a whole they are both wonderfully distinct yet dovetail into each other smoothly.  We have a mythic retelling, a police procedural and a post apocalyptic tale but it does feel like one continuous tale told from different perspectives.

The Sleeping and The Dead probably edges in front as my preferred story but it’s close.  I have a penchant for the post apocalyptic.

Ishtar fits Gilgamesh Press’ vision beautifully.  Here we have three quality writers giving us their take on Assyrian myth, breathing life into a culture that underpins our own. Ishtar steps from the pages; a living, breathing, sensual and violent goddess – come and meet her.

If you like your fiction dark and your women powerful don’t go past Ishtar.

1.Gilgamesh Press is an imprint of Morrigan Books. Gilgamesh Press has a vision to promote awareness of the Assyrian people and their history through literature.↩