Musings on writing and horror

I am currently reading Danse Macabre by Stephen King, who I am beginning to appreciate and admire the more I read him and the more I learn about him.1 I am enjoying King’s reflections on horror and his personal anecdotes that are dotted throughout the work.

I am also trying to kick my butt into writing gear.  I want to get a short story to a publishable standard by the end of 2012.  And so I am delving into Damon Knight’s Creating Short Fiction -The Classic Guide to Writing Short Fiction. in an attempt to refine my work and/or encourage me to finish it.

I have a couple of works that would be described as borderline horror in various stages of unfinished malaise.  I have a feeling that some of the writing is good and some of the ideas original, but also that to a large degree they are boring.  And if they are boring to me, then the reader doesn’t have a chance.

So I have been pondering, letting my mind drift. While doing so, it’s occurred to me that nothing fictional, really induces a sense of horror in me.  No gut wrenching sense of dread or paralysing fear.

I read a very good piece of horror fiction recently by one of Australia’s top horror writers and despite being a great piece of writing, it didn’t scare me or horrify me. Indeed  I can’t really remember that I have been in my adult life horrified (as result of reading).

Sure I have the usual fears and anxieties but these are relatively mundane things that are more stress inducing than terror inducing.

I’d like to be able to write something that could scare me.  If I could do this then I am sure that it would sure as hell scare my readers as well.

So I have been digging deep trying to find an experience, something that has occurred in my past that evoked a childish terror.  I can only think of one and it follows:

This story begins not in some haunted mansion, with rickety floor boards and uneven walls that creak loudly with a gust of wind, but in a government issue house, clad in tan coloured brick, lined with plasterboard walls and fitted with white laminate furnishings.

It is the early eighties, my sister is two and I have been given the big room.  My parents are in the lounge room in the other wing of the house.  To call it a wing perhaps conjures up a certain sense of size and distance though they can’t have been more than 10 metres from my bedroom door.

The house was a much used H design.  A carport in the middle. A lounge and kitchen in one wing, bedrooms in the other a hall connecting them.  As ordinary as one can get with budgetary constraints and unimaginative architects.

I can hear the television’s indistinct murmur.  My sister is asleep in the next room.  I am lying on my bed directly in line with the door that leads to the hallway.  Sharing the same wall with the door is an inbuilt cupboard and a vanity lit by a fluorescent light with a pull cord.

It's not late, but I am lying in bed.  The room is lit by the flouro over the vanity. I am  fully awake and staring at the pull-cord.  It’s last few inches hang over my teddy bear who is lying prone a top a leaning collection of golden circle children's books.

I lie staring at the cord. On reflection I think I must have seen Star Wars recently as, with a childlike naiveté, I begin reaching out with my mind, attempting to move the cord by force of will alone.  I am not aware of how long I do this for but eventually  I begin to notice the slightest of movements. There are no drafts in my room, the window is shut and the cord hangs in a recess.

And perhaps you will say it was my willing it to move and tiny movement in each of my eyes that makes it appear to do so.  My well read, sceptical older self agrees with you.

But dear reader, it is not this small movement that is what will haunt and terrify me for the rest of my life.  For while I am somewhat overjoyed at the thought that I can do it, that I can master some unseen force and engage it to do my bidding.  This fleeting joy is erased by what follows.

I am no longer concentrating on making the cord move.  But I am staring at the vanity.

The bear lying upon  the books, begins to sit up of its own accord.  This is no trick of the light, no slight movement.  From lying prone, it sits until its back is ramrod straight all in a matter of seconds.

And I scream. I scream for my father - an open mouthed scream with no sound. My vocal cords feel leaden.  I scream again and all that comes out is hoarse whisper. I scream and scream until eventually my father comes rushing into the room.

In a babbling confusion I explain what has happened.  The bear is lying prone again.  My father spends some time sitting with me, consoling me.  He explains to me how it must have appeared that the bear was moving.  Car lights coming around the bend and casting shadows is his explanation.  He turns off the light to demonstrate and sure enough a car rounds the bend near our house and shadow and light float across the room.

But, I try to tell my father – the light was on.  There was no shadow.

He takes the bear, reassures me that I must have been dreaming and closes the door.  I look at the bear one last time as he hangs up ended in my fathers hand.

His cold button eyes are lifeless. 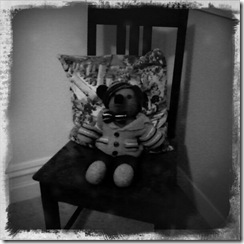 1.I have come to King late in my reading life.  For some reason I can’t discern I had developed a bias against horror, a silly notion that it doesn’t quite sit on the same literary merit shelf as science fiction of fantasy ↩