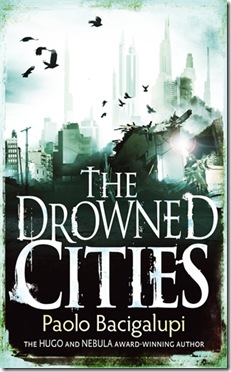 The Drowned Cities is published in Australia by Atom, Hachette’s Young Adult brand.  To adult readers I would like to stress that this really has no impact on your enjoyment as an experienced or mature reader - it’s just quality fiction.

With The Drowned Cities Bagicalupi builds upon and expands his vision of a dystopian future.  Like Ship Breaker the theme and content mirrors or comments indirectly( I never feel as though Bagicalupi is preaching) upon present day issues.  Ship breaker concentrated on a characters whose living was made stripping great containerships – a modern day inspiration, was no doubt something similar to The Chittagong Ship Breaking yards in Bangladesh.
The Drowned Cities’ theme centres squarely on the horrors of low scale internecine warfare in failed states and the sad reality of child soldiers and child victims of war.  Bagicgalupi brings the tale closer to home with his setting – The Drowned Cities being the flooded remnants of the eastern states of North and South Carolina.

Mahlia and Mouse are War Maggots, orphans or refugees taken in by Dr Mahfouz who administers medical treatment to the families of Banyan Town.  Mahlia is a mixed raced daughter of a Chinese Peacekeeper and American/Drowned Cities mother, she’s had her right hand cut off by the Army of God due to this fact.
Mouse is a country boy with a talent for dodging bullets.   While their situation isn’t ideal i.e. the town’s folk distrust her, it’s relatively safe.  Until that is, Tool,an escaping half-man, a genetic augmentation, draws militia pursuers to their quaint little piece of post apocalyptic hell.
What ensues is part comment on the stupidity and futility of war but also on the strength of  friendships borne out of survival.

Mahlia is the star of the story and I find her depiction as a strong female character particularly realistic and refreshing.  She’s a child of war, a survivor and her strength shines through, in her dedication to her friends and her will to go on.
She displays cunning in her battles against forces that are physically stronger than her and is a refreshing hero in that she doesn’t need a gun or kick-arse martial arts moves to be strong.
We also get a better understanding of Tool as a rare breed of half-man, one that has overcome his genetic tendencies and training to obey his masters.
I also saw the depictions of the various militias in the book as comments on the some of the extremes of current American politics or political ideologies both in terms of religion and patriotism/nationalism.  No doubt some American readers might find Bagicgalupi’s future imaginings a little pointed.

The book deals with some fairly mature content.  I never felt as though Bagicgalupi was playing to the more violent aspects of the book though. There’s death and dismemberment but is well handled, repectfully depicted and fits well within the context of the world that’s been created.
I can see Ship Breaker and The Drowned Cities as good jumping off points for discussions in a class mixing literature/reading with social studies.
The depiction of sex within the book, such that it is, is handled “off screen”.

A good addition to Bagicgalupi’s vision of a world in decline or crawling out of one.  There’s violence, poverty and calamity, but there’s also hope. There’s always a sense that the protagonists can prevail - not without consequences mind you, but that it is possible.
This book was provided to me by the publisher at no cost to myself