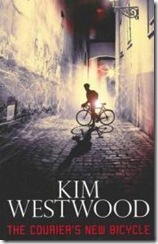 The Courier’s New Bicycle is Kim Westwood’s second novel and its nice and compact at 327 pages. Playing wonderfully to my own biases and beliefs, Westwood has taken some of my dark fears and made a scary reality of them.

The World
The world of The Courier’s New Bicycle  is a near future Melbourne.  Australia is in the midst of a fertility crises caused by a compromised H1N1 vaccine. The population is largely infertile and while several fertility companies sprang up to deal with the crisis, a swing in power to the religious right sees these companies outlawed. The resultant Australian cultural landscape is a dominionist’s wet dream.

With power In the grip of religious fanatics anything outside of very hetero normative ideals of gender are held in contempt.  Hessian frocked prayer groups wander the streets laying on hands and Neighbourly Watch lurks like a synthesis between the Gestapo and a Christian version of the Mutaween.

Our Protagonist
The Courier’s New Bicycle features a “gender transgressive” protagonist, Salisbury Forth. Sal has achieved a comfortable( for Sal)  gender identity that sits between male and female.

Sal is a courier for an ethical hormone supplier and is good at the job, genetically gifted with a body for it.  Sal becomes a reluctant detective when unknown parties target the boss’ business. When Sal’s friend Albee is injected with kit laced with pesticides, the business war becomes personal.

Is it a dystopia?
I’m not sure.  I find it an all too plausible reality, one that only requires a few changes to get to it from present day Australia.  Westwood has done an excellent job of extending current circumstances - political, social, environmental and religious. She tweaks recognisable institutions and extrapolates current Australian culture with skill.

The conservative party( both religiously and politically) Nation First is eerily close to a combination of Family First and One Nation. The contempt in which “gender transgessives” are held is not too different from conservative values held by the majority of the Australian population – only in The Courier’s New Bicycle hatred of “The Other” is given the imprimatur of both state and religion.

On Gender
The novel has an androgynous protagonist and is at least in part an exploration of the life and experiences of ‘The Other’.  Whether ‘The Other’ be the transgendered, the animal activist, the immigrant or the socially undesirable street racers.

Now I don’t know if it’s the fact that I have been fortunate enough to listen to quality gender discussions and that I am comfortable in my gender/sexuality, but I didn’t find that exploration at all uncomfortable or confronting.

The treatment of said characters by the over zealous religious society inflamed my internal sense of social justice, but the treatment itself is sadly all too close to what ‘The Other’ experience in the here and now.  For a reader who has lived a very sheltered life their response will no doubt be different.
For me, I am just happy to have a cracking good story, whose protagonist and supporting characters are drawn from genderqueer and other diverse communities.

What impressed me.
There’s a tangibility to Westwood’s world building.  I don’t know Melbourne all that well but it feels to me that she’s captured the essence of the city and then cloaked it in this oppressive tension. The spectre of Neighbourly Watch always in the background and the fact that Sal’s entire life is pretty much illegal.

Honestly The Courier’s New Bicycle is a great read, an Australian speculative fiction, novel with elements of crime drama thrown in. When people think speculative fiction is just shooting rockets at Jupiter or dog fights in space, press this into their hand.

A beautiful sketch of darkly shaded future that I hope never comes to pass.