Book Review–Wind Though the Key Hole by Stephen King 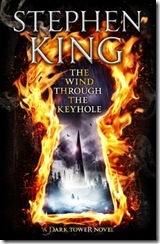 I can remember buying the first book in the Dark Tower series by King when it first came out.  For some reason I never took to it.  Possibly it was a result of my reading taste and experience at the time or the fact that King uses a dialect that’s part regional American, part fantasy for his characters.


Bix turned to Roland. “Ye come from Lud, I wot. I’d hear of Lud, and how things go there. For it was a marvelous city, so it was. Crumbling and growing strange when I knew it, but still marvelous.”

In any case I found that it took awhile to get into the rhythm of the book The Wind through the Key Hole .  But once I did, it was vintage King.  A story that draws you in slowly and then before you know it you are hanging on the outcome of every sentence.

The Wind through the Key Hole by King’s own admission sits somewhere near the middle of the Dark Tower series, around 4.5 according to the foreword in the book.  That being said it works very well as a stand alone or a teaser to get you interested in the rest of the series.

The Wind through the Key Hole is also interesting from a structural point of view. It’s marketing copy describes it as a “Russian Doll of a novel”, three narratives fitting neatly within the other.
We meet Roland and his Ka-tet( gang or posse) on the road to somewhere – it’s downtime between major events.  The are forced to seek shelter from a storm and Roland begins telling them a tale of his younger days.  Enter the second story, the inner shell. In this inner narrative the “wet behind the ears” Roland is partnered with Jamie Red-Hand to investigate tales that tell of a Skin-Changer attacking folks in the town of Debaria, this tale is Western come mystery.  The only witness to the latest murders is a young boy, who Roland tells the story of Tim Stoutheart or The Wind through the Key Hole, to help give him courage.

So The Wind through the Keyhole is the inner most story and the one with the most meat, a dark fairy tale of sorts. With a gruesome if a little predictable end.  Though that’s part of the terror, anticipating what might happen.

I thoroughly enjoyed the book and have been inspired to revisit the series from the beginning.  New readers might be a little put off by the lingo and the strange setting, but persevere, it’s worth it.

This book was a review copy provided by the publisher.
Did you enjoy this review? Would you like to read more? You can subscribe to the blog through a reader,by Email or Follow me on twitter.
Posted by Sean Wright at 1:36 PM