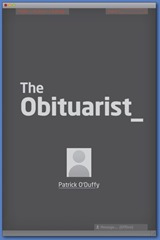 The Obituarist is Patrick O’Duffy’s first crime novella.  He’s a multitalented chap though, so check out his website.

Kendall Barber is a social media undertaker with a shady past who's returned to the equally shady city of Port Virtue.

Now a new client brings with her a host of dangers, just as Kendall's past begins to catch up with him. Can he get to the bottom of things before it's too late, or will he end up as dead as his usual subjects?

The idea of a social media undertaker in itself is quite refreshing.  I have heard of companies that will offer a service to repair your online reputation but not one that will, post death notices and remove you digital traces to prevent identity theft. So bonus points for the original concept.

Now Patrick dedicates the novella to his wife Nicole and Raymond Chandler. Its style is a bit of homage to hardboiled detective fiction, I’d say Chandler-esque but then I have never read Chandler.  You can read for yourself below:

Jay Moledacker was far more handsome in death than he ever had been in life. Okay, not true, but at least his Facebook profile picture was now a lot more dignified. Not difficult, since his profile picture while alive had been a photo of him drunk and vomiting onto a horse during a racing carnival.

Now that he was dead – of an embolism, rather than being kicked to death – he looked regal, elegant and a good six years younger. That's because I had to use his graduation photo; everything after that point seemed to involve Jay throwing up, getting punched in nightclubs or out cold with FUCKWIT written on his chest in mustard.

And it had fallen to me to close it all down.

Which didn't stop my clients – his parents – from dicking me about on the invoice.

I like Patrick’s style and “A life well lived. Well, a life. Lived.” I thought was the single best line in the book.

The humour which is largely self deprecating or at Kendall’s expense endeared the character to me. This guy ain’t no muscle bound hero, he has computer smarts, not street smarts - a fact that is well played to in this novella.

The one’s you don’t see coming

There was only one thing that impacted my enjoyment of the novella and that was the resolution of the subplot(I won’t go into specifics as it would spoil the novella). It was, in my opinion, simply resolved too quickly and stretched my suspension of disbelief too far.

When I have been led to belief that Kendall is largely a reluctant detective (at least in a physical sense) and prone to having his butt kicked, the resolution felt a little out of character.  Perhaps I missed some early clues but I was blindsided by this resolution.

The main plot resolution was brilliant though and I only just caught on before the reveal. Very clever Mr O’Duffy very clever.

The Verdict Your Honour

This is funny, and fast paced detective fiction with a modern concept and an Aussie setting.  A good couple of hours entertainment.  I’ll be watching for more of O’Duffy’s work.