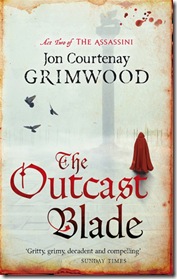 Grimwood’s The Outcast Blade is the second book(Act Two) in what I suspect will be The Assassini trilogy.  It’s a tale that exposes the reader an entertaining mix of history and dark fantasy.

And yes it’s another series where I am starting in the middle.1 But despite this and despite it being very much a book two,2 I was  swept up in the intrigue and action.

Venice, an independent state sits uneasily within the grasp of two empires.  The Holy Roman Empire under the German Sigismund and the Byzantine under John V Palaiologos.  The former uses the formidable Krieghund shock troops i.e. trained werewolves in their man/wolf shape, the later powerful magic's.

Though Venice herself is not without power.  Ruled by the Milloni, descendants of Marco Polo, the current Duke may be intellectually disabled but his mother Alexa is distant cousin to the Khan of Khans and a powerful magic user in her own right. Unfortunately Venice is a hot bed of incestuous and deadly intrigue and its might is divided by power plays and infighting with various factions.
Enter Tycho, a recently knighted slave, and vampire.  He destroyed the Marmaluk fleet single handedly by giving into his hungers, but all he hungers for now is the Lady Guilietta.

The newly widowed Guilietta is the jewel in Venice’s crown though and both empires dispatch sons to wed her and claim Venice for themselves. Besides, Guilietta hates Tycho anyway.
What follows is a tense game of Machiavelian intrigue, murder, love and outright slaughter.

The world of The Assassini probably sits more comfortably in the Dark Fantasy category than Alternate History.  The later category covers more or less departures from accepted history by way of certain major events not occurring or alternative happenings that change the course of history.
Grimwood takes history and plays his own song with it.  Mixing real historical personages with the fantastical.  He does it well too.  About the only thing that bugged me was the open and flagrant use of magic in what is still a Christian controlled Europe particularly on behalf and with the knowledge of the Christian Emperor.  Nothing in the world building explained this sufficiently for me.

The writing and the story got me over this nagging oddity and it was refreshing to see Vampires that were afraid of sunlight and carried a hungry beast within, that forced them to carry out monstrous deeds.  Not quite a return to vampiric horror but better than sparkly supermen3 .

The dialogue was quite short and punchy and Grimwood did a great job of evoking a believable 15th century Venice, down to the moss covered stones and the gut wrenching smells.

If you' are a fan of liberally pilfering history for good ideas and well paced action with some twists and turns I think you’ll enjoy The Outcast Blade.  It intrigued me enough to pick up book one.

This book was provided by the publisher at no cost to myself.

1.Ah the trials and tribulations of getting review copies↩
2. Feels very much like a bridge to the final book. Enough action to keep it moving along but definitely a sense of anticipation for a big finale ↩
3. I didn’t mind Twilight as a book, but the Vampires weren’t my kind of bloodsucker↩
Did you enjoy this review? Would you like to read more? You can subscribe to the blog through a reader,by Email or Follow me on twitter.
Posted by Sean Wright at 5:37 PM