Viva the Revolution– Steampunk that is 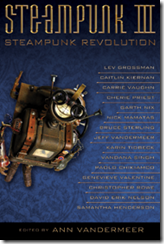 Jeff Vandermeer has announced that Steampunk III – Steampunk Revolution will be coming out later in the year.

I have the previous two volumes and the Steampunk Bible, so this will probably be a Christmas present for me.

Ann Vandermeer’s got the table of contents nailed down as well.  I note a couple of Australians as well as a fairly gender balanced set of contributors.

Feast your eyes on the TOC below

“On Wooden Wings” by Paolo Chikiamco

“The Seventh Expression of the Robot General” by Jeffrey Ford

“Beside Calais” by Samantha Henderson

“The Effluent Engine” by N.K. Jemison

“The Heart is the Matter” by Malissa Kent (original)

“Peace in Our Time” by Garth Nix

“A Handful of Rice” by Vandana Singh (original novelette)

“Mother is a Machine” by Catherynne M. Valente

“Captain Bells & the Sovereign State of Discordia” by J.Y. Yang

“The (R)Evolution of Steampunk” by Austin Sirkin (original)

I have been nominated to run in this years fan fund for the National Science Fiction Convention to be held in Melbourne. If you appreciate the work that I do in Australian Speculative Fiction Fandom and you have a spare $5, you can vote for me here and help send me to the National Conference.