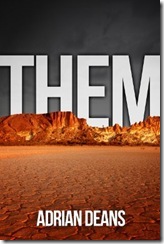 Rob Lasseter is the great grandson of a legendary explorer. His prized possession is an old parchment, which is thought to be a map showing the location of the fabulous reef of gold. Unfortunately, however, there are no points of external reference on the map. The only words are ‘You are here’, next to an X, but Lasseter doesn’t know where X is – he doesn’t know where to start looking.

Inspired by the strange disappearance of the White Haired girl, and the receipt of a letter addressed in his own handwriting from a place he had never been, Lasseter (with his friend Miles, who claims to be dead) embarks upon an odyssey into the centre of Australia and has some very strange adventures. Lasseter thinks he is looking for gold, but instead he finds something far more interesting. An Australian story of pan-cosmic enormity.

I don’t know how I feel about Them.  Parts of it had me laughing when I shouldn’t have been, other parts had me cringing. At all times, though, I was faintly aware that I might be missing some point that Adrian was hinting at; that he was being very clever and I was missing the signposts. Then again maybe it was the nature of the novel where realities and characters alter at different points.

There was misogyny from the main character early on which didn’t endear me:

Things were going pretty well for Lauren and me. We’d been living together for nearly a year and were to be married in the spring. We were 100% fully compatible, with much more in common than the average couple. We both like sex and too much wine. She even likes football, and, for a woman, is blessed with uncommon wit. 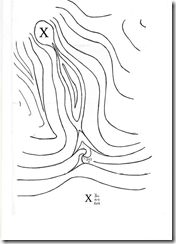 But I was willing to keep reading, plenty of good books with absolute dicks as the protagonist.  The description of office politics was interesting as well and again I wasn’t entirely sure if Deans was being playful, I am sure that there will be guys that will read about the “Lesbian Network” and nod in agreement. What I am not sure whether Deans is having a go or playing with the reader.

I did enjoy the pop culture references and the digs at Tolkien.

As realities alter and Lasseter travels to more simplified realities, more stark in their conflicts, we have some veiled commentary on the city and country divide.

“We call it The Cause. It’s a war against the Eggheads ‒ the fuckin’ smartarses in Sydney and Melbourne who reckon they’re born to rule!”

I must have looked confused because she attempted to clarify.

“The Eggheads tried to tell us that their votes were worth more than our votes coz they had fuckin’ degrees an’ shit. Doesn’t mean they know how to run a fuckin’ cuntry!”

All well and good, and I enjoyed the poems of Darian Sande (with apologies to Banjo Paterson I'm sure).  Being dragged off to a Feminazi internment camp called OZschwitz though had me cringing.   Was Deans taking things to an extreme, to point out the ridiculous nature of extremes .  Having fun with the reader?  Leading the reader or just telling a story?

It’s a reality hopping ride that could be about the nature of reality, a quest novel, or just about Rob Lasseter getting the life he wanted.  It’s well written, but not a book that I could give to friends without some reservations and not one that I am entirely sure that I have understood.

I can say it’s different and if you want to stretch yourself and get out of your comfort zone give it a crack.