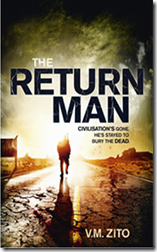 The story
A contagion  has rendered half the US a dead zone where zombies roam free.

Our protagonist Henry Marco is the Return Man. He’s paid by relatives or friends of the “zombified”, living in the safe states of the US, to “return” them or kill their zombie form.

Zombies retain some memory of their previous lives, “emotional geography” Marco calls it and it enables him to track zombies with a few clues about their former lives.

So Marco kills the dead, “again” and collects personal affects to send to the relatives as proof of job done.  His brother in law runs the operation from safe side while Marco also searches for the one zombie he can’t locate, his wife.

The catalyst for the book’s plot is the discovery by politicians in the Safe States, that there was a scientist working on a cure for the contagion.  Unfortunately he was working at a medical corrections facility in the heart of zombie territory.  Marco is the man chosen to lead a special forces team into the facility and retrieve what information they can, written or biological.

Of course,  all is not what it seems.

Fresh Zombies
Zombies are effectively mainstream; possibly not as mainstream as Vampires, but they are no longer just the fare of B grade horror theatres or cult followings.  That V.M. Zito has given us a fresh story and a compelling take on the zombie says something about his skill. It will be interesting to see what he tackles next.

I like that he’s chosen to go with the slow zombie, rather than the steroid infused super zombies that are featured in the Resident Evil franchise.  To me, a slow and relentless walking dead is far more horrific and helps set the tone of the book.  Marco is a survivor, but he’s being stretched thin, he can out run and outthink his zombie adversaries but he’s just one man and the dead are relentless.

The Return Man is equal parts gruesome zombie horror and thriller.  As soon as we have a good grounding in who Marco is and what his life entails, the book sets off at a blistering pace, never giving the reader a chance to catch their breath.  There are plenty of explosions and gruesome scenes that would delight a movie art department.

It finishes with some nice and unexpected twists at the end, some good misdirection on Zito’s behalf.
The only issue I had was with some of Zito’s characterisation, and then it was only some of the supporting cast.  The most army sergeant who assists Marco, Ken Wu, struck me as a little two dimensional, a little stereotypical but not enough to disrupt my enjoyment.

Oh and if your looking for strong female characters, you’d best look elsewhere, this is a boys own adventure.

Staggering relentlessly to a movie screen near you.
I wouldn’t be surprised if we see a version of The Return Man on the big screen. It has the right balance of horror and action.  It  appeals to the sense that American is in decline, once again an underdog.  It’s a tale of the individual against the many, dead or alive.

If you like intelligent Zombie fiction, of the 28 Days Later variety I think you’ll enjoy The Return Man.

This book was provided to me by the publisher at no cost.
Did you enjoy this review? Would you like to read more? You can subscribe to the blog through a reader,by Email or Follow me on twitter.
Posted by Sean Wright at 11:16 PM