I will be discussing the Ditmar shortlist

but not today.  Some may have wondered if  my relative silence was as a result of a head injury after the fainting fit induced by being nominated for 2 Ditmars, it was thankfully not the case.  Though I did have a rather sleepless night which wasn’t  good considering Friday was my first day back at work.

But work is good, work means the likelihood of getting to Continuum 8 is greater.  So expect some sporadic quietness around these parts as I jump upon any paying work.

I do intend to do a post on each of the Ditmar Categories in the lead up to the event.  There’s some great people and product in that list and I have read a great deal of them in the past year, so feel invested in the awards already.  So tomorrow or the next day.

I am celebrating my wife's 39 and 12 months birthday this weekend which will also take up much of my time.

But before I go check out Trent Jamieson’s release details for the sequel to Roil(sadly not on the list despite my nominating efforts). 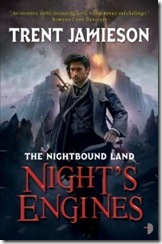 The Nightbound Land has been with me since around 1999 and since then I’ve been married, moved house several times, changed jobs, sold short stories and, eventually, novels. It’s one of those projects that I should have perhaps let go long before it sold, but I never could.

I’ve learnt almost everything I know about writing books by writing these. And, to be honest, delivering Night’s Engines put me in a bit of a spin at the end of 2011. There’s so many books I want to write, so many different things that I am working on, but when I delivered that book – my fifth in two years – it really felt like I’d pulled a big chunk of my heart out of my chest and dropped it on my desk. To say it was hard to get going on things again is an understatement. Which isn’t to say that I haven’t been writing, but there’s been a rather large element of aimlessness to it.

Oh and expect a review of The Return Man by V.M. Zito and Westwood’s, The Courier's New Bicycle in the coming week.