The Twelve Planets are aligning 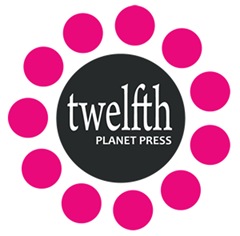 Twelfth Planet Press informs us that:

…author Deborah Kalin has joined the Twelve Planets series with a collection featuring her beautifully horrific story, “Wages of Honey”. One of our authors has had to bow out of the project, but we count ourselves lucky to be able to include Deborah’s extraordinary stories.

Sad to hear that someone has had to bow out but the great thing about female talent in Speculative Fiction in Australia is that we have plenty of depth.
I have a couple of Deborah’s books in my review tower1, and will hopefully get to interview her in the near future.
Deborah Who?
Deborah Kalin (pronounced KAY l’n) is an Australian author based in Melbourne. She’s had a duology, Shadow Queen and Shadow Bound, published by Allen and Unwin. Checkout Booktopia for ebook and papeback versions.
Aurealis magazne described her as:

She can be found inhabiting her website here or under the cunning disguise of @debkalin on Twitter.

1.In the interest of truth it long ago ceased being a pile↩