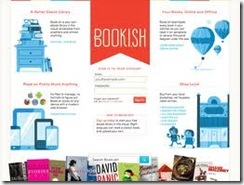 According to this report the innovative Australian company Booki.sh has been acquired by digital distributor Overdrive. Checking the Booki.sh FAQ site confirms it.

Booki.sh provides the ereading platform behind a number of independent Australian bookstores, Readings, Avid Reader and Gleebooks among them.  It’s a browser based service accessible by a range of net capable devices from desktop and laptop computers to IPhones and Android tablets.

Its a handy technology, provided you have some access to the internet. You can download a “satchel” to your browser and access the satchel while not connected to the net.

The impetus behind the development was to break the closed system model used by companies such as Amazon that generally required you to have a kindle ( though with Kindle for <insert device here> it seems slightly superfluous), so that you weren’t limited to any one device(except those that were net capable)1.

DRM but not as you know it

Which is why I generally baulk at a service like this.  I like to think that when I am paying for an ebook that I own it and I can store it in any fashion I so choose and access it without having to go through a middle party that can:

a) alter my library at any time

That being said they do have a service by which you can upload your own legally obtained eBook files and  view them3 .  I have been doing this with Aurealis and Asim which the Kobo App doesn't seem to handle well and the process of loading the books is far easy than side loading on the Vox.

Overdrive is one of the largest providers of digital media content, supplying about 18,000 libraries, including some in Australia. The large attraction I suspect for Overdrive is that the service balances DRM and access fairly well.  If the purchaser doesn’t get a file, they can’t crack it and pirate it 4 and if you make the service available on any net capable device, legitimate users are less likely to be pushed toward illegal activity so they can access it on the device of their choice.

It will be interesting days ahead. One hopes that the acquisition isn’t just a snapping up of technology; as the team at Booki.sh were very supportive of the Australian book scene.

1. I engaged with one of Booki.sh developers over this point and their view was that net capable ereading devices were where the market was heading↩

3. Once they are there though you will be unable to download them again.  Its not like dropbox.↩

4. Though I do recall hearing that there were folks that were trying to hack the service↩