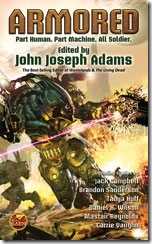 [Edit: I had a copy of a place holder description of the book what follows is the final copy]

Decades ago, Starship Troopers captivated readers with its vision of a future war in which power armored soldiers battled giant insects on hostile alien planets. Today, with the success of Iron Man, Halo, and Mechwarrior—and with real robotic exoskeletons just around the corner—the idea of super-powered combat armor and giant mecha has never been more exciting and relevant.

Now acclaimed editor John Joseph Adams brings you the first-ever original anthology of power armor fiction. Join leading SF authors Jack Campbell, Brandon Sanderson, Tanya Huff, Daniel H. Wilson, Alastair Reynolds, Carrie Vaughn, and others as they explore the limits of what a soldier of the future might become—with the aid of the right equipment.

Imagine power armored warriors battling at the bottom of the sea, or on nightmarish alien worlds, or in the darkest depths of space. Imagine armor that’s as smart as you are, armor that might keep on fighting even after you’re no longer willing … or able.

The cover artwork above is by the talented Kurt Miller.