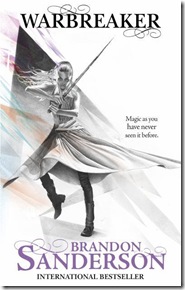 Imagine being able to take a piece of your soul and use it to manipulate the fabric of the world around you; from augmenting your strength, to animating the inanimate to creating an army of 40,000 lifeless zombies.
Such is the magical system of Sanderson’s Warbreaker .  A tale of two exiled royal sisters Vivenna and Siri, one of whom must marry the Returned (resurrected) God King.

It’s a tale of two cultures, one austere the other flamboyant, one that delights in the ability to use BioChromatic magic, one that see’s it as an abomination.

These two cultures are set on a path to war, the sisters must stop it.  Help as well as hindrance will come from strange quarters, and if you thought the politics of humans was internecine, they have nothing on the gods.

Thumbs Up?
Sanderson is to be applauded for giving us, once again a detailed and unique magic system that is entwined into the very fabric of the story, rather than a tacked on after thought.

The concept of BioChromatic magic- a magic that comes from the Breath,  a transference of a soul like power into inanimate or dead objects, is brilliant.  The way that it manifests, draining the colour from objects it’s stored in, or enhancing the vision, taste and feel of those that hold more than one Breath, makes for some stunning imagery.

The depiction of two strong female protagonists in Siri and Vivenna was also a welcome inclusion, even better though was that their strength was for the most part displayed through non violent means.  Not all strong female heroes need to be Xena.

The use of  Breath as currency, or a commodity to be bought and sold, the symbiotic relationship between Gods and their followers was, dare I say it a breath of fresh air.
The world of Warbreaker is definitely not your traditional fantasy setting.

Thumbs down?
And that for me was part of its undoing.  Front loaded with gorgeous world building and detailed description of the workings and logic of the magic system, the pace of Warbreaker doesn’t pick up until about page 400.

There is enough information within the book to easily background a trilogy, but the end of Warbreaker sees a fairly solid resolution that doesn’t require another book. I can’t but feel that the book should have been shorter and more succinct or spread out over two or three books.

The theological banter and witty repartee between the god Lightsong and whoever he chose to inflict his wit on, also began to grate on me. The dialogue in the later began to feel overdone, while my irritation with the former might just be my increasing impatience with theological waffle in reality.

Verdict
The last third of the novel saves it.  Sanderson creates a wonderfully intricate society and magic system, slowly moving the plot forward for 400 pages and then bam it’s all over. If you have the stamina it’s worth hanging in until the last third of the book.

This book was provided by the publisher at no cost to myself
Did you enjoy this review? Would you like to read more? You can subscribe to the blog through a reader,by Email or Follow me on twitter.
Posted by Sean Wright at 2:51 PM