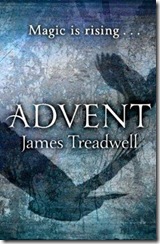 “Like the Tale of King Arthur, the Faust Legend is one of those stories that exists mostly in outline” - Author’s Note

Advent is a retelling of the legend of Faust and as the author indicates above, the legend is sketchy.The book really only uses it for some salient facts, mixing it with the legend of Cassandra as a jumping off point.

Advent alternates between the story of Gavin, an only child who has always been a bit different and the greatest magister the world has ever known Johannes Faust.  Treadwell switches between the two, going backward and forward in time until their two stories converge, with nasty consequences.

Gav is being sent away to the country to “holiday “ with his eccentric aunt and Johannes is trying to sail to England to avoid his prophesied fate.

Evocative and Descriptive
The writing was evocative.  Treadwell gave me a very real sense of place, a magical country idyll, with sinister foreboding.  Initially I thought it was going to be a Potter-esque tale, a coming of age story where the protagonist would become a great wizard, albeit with a darker, more mature edge than that of our friend from Hogwart’s.

The story is for most of its length a mystery to be solved.  Who is Gavin?  Who is Ms Grey(his ghostly “imaginary” friend)?  Why does his aunt never meet him at the station?  Unfortunately this questioning, and atmospheric foreshadowing seems to go on too long.  The story moves at too leisurely a pace.  Our protagonist wanders in a daze, never really put under pressure until the last minute(50 pages).  Impressive and evocative as the writing was, it wasn’t enough to sustain the story for me.

Women cast in an unflattering light
In discussing the book with another reader, the subject of female characters came up.  None of the depictions were very flattering -  Marina is young vacant and prone to distraction, the Professor needy and on the verge of a break down, Ms Grey sinister, Mrs Jia a busy body, and Gav’s aunt a hair brained Wiccan. Gav’s mother is the most kindly portrayed and she’s out of the story early on.

In summary, the writing is more than competent. There is any interesting weaving of Faust with the legend of Cassandra but the pacing killed my enjoyment.