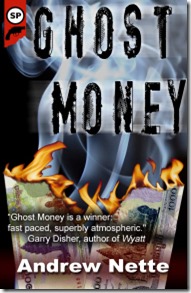 Published by the very pulpy sounding Snub Nose Press, Ghost Money is a solid outing for a first novel.  Though I don’t read a lot of pulp Crime, I think I have enough of a handle on the genre to sense where Nette is going with this novel.  For the most part I think he gives us a pulpy feel without the misogyny, treats the history of Cambodia respectfully and gives us a well paced read.

Ghost Money is pulp detective fiction featuring an Asian-Australian lead, Max Quinlan the son of an Australian ex-serviceman and a Vietnamese mother.  Quinlan’s an ex-cop recently self-employed as a private detective on the trail of an Australian businessman lost somewhere in South East Asia. Chuck in the dismantling of the Khmer Rouge, a country in turmoil and you have an interesting backdrop, with plenty of scope for double dealing and dastardly acts.

What I like about Quinlan, is that once Nette takes him further away from his area of expertise ie investigation, the reality that he is largely on his own, and increasingly out of his depth, impact on the character.  Our tough guy has his limits.

Nette's research and experience working in South East Asia is evident in the novel; perhaps too much so in some cases.  There were times when the history and the ambience that Nette tried to generate though imparting it, felt a little clunky.  A subtler delivery of the information or perhaps less information would have ensured a smoother read for me.

That being said I am a history nerd, with some undergraduate background in Ancient South East Asian history so I enjoyed the history in and of itself.

Ghost Money is gritty without indulging in it and considering the history of Cambodia, that’s a wise decision on Nette’s behalf.  The romantic liaison, a staple I am sure of every pulp detective novel, felt a little light-on for me.  There were two potential love interests and I am not sure if the character’s choice necessarily married up to the effort Nette put into developing the back story.

Perhaps we’ll see the further adventures of Max Quinlan, where his choice of dame comes back to bite him.