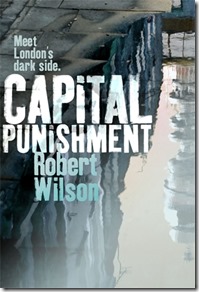 Capital Punishment is the latest from Gold Dagger Award winner Robert Wilson. An author with a raft of books that I have yet to discover and a couple of television miniseries based on his works.

Now when it comes to crime fiction and espionage I am a fan of gritty realism, well researched and constructed secondary worlds, and good pacing that never lets you relax for too long.

Some may think it’s easier to write a work that’s set in a world only slightly removed from our own – no races or continents to construct.  I’d argue that it what it might save in terms of the building of a realistic secondary world is paid out in attention to detail, detail that can at the press of a key, be double checked by your readers.

How does Capital Punishment hold up?  Pretty good.  Not enough perhaps to knock the earlier works of Barry Eisler off my favourite crime/espionage/thriller list but the attention to detail is there and most importantly the pacing.  As long a you don’t write a clanger of an error, good pacing, I think can cover a few sins.

Capital Punishment is a gritty blend of espionage, terrorism and old fashioned crime. Charles Boxer is a kidnap recovery specialist, ex-army, now working in the private sector.  He’s hired by Indian billionaire Frank D’Cruz to help recover his daughter from the hands of a professional kidnap team.  It’s set primarily in London, with some scenes in India for flavour and has that understated English feel to the narrative – gritty environments, hardened professionals, no-nonsense criminals.

The pacing was excellent, and I finished the book within a couple of sittings.  The only let down for me was the ending, which seemed a little anti-climactic to me.  I felt as though Wilson hadn’t made me worry enough about the characters or the situation.  What was high stakes seemed to pan out okay in the end and I kept waiting for a twist that didn’t come.

That being said I’d gladly read Wilson again, the journey was enjoyable even if the ending was a little underwhelming.