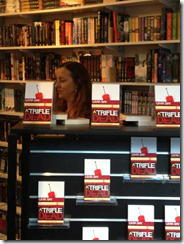 In Perth A Trifle Dead was launched by Dr Helen Merrick, snapped here by Twelfth Planet Press Director, Alisa Krasnostein. I believe that the author appeared at the Hobart launch, but shots of the elusive Ms Day are …um ..eluding me.

If you want to get a sneak peak at Australia’s best kept Crime fiction secret check out the first chapter below:

You can tell a lot about a person from their coffee order. I play a game with the girls who work in my café—guess the order before the customer opens their mouth. It’s fun because half the time you’re spot on—the bloke who would rather die than add anything to his long black, the girl who doesn’t want to admit how weak she likes her latté, the woman who’ll deliberate for twenty minutes as to whether or not she wants a piece of cake (she does), the mocha freak, the decaf junkie.

The rest of the time, you’re completely wrong. An old age pensioner requests a soy macchiato, a gang of pink- haired school girls want serious espresso shots, a lawyer in a designer suit stops to chat for half an hour about free trade… The best thing about people is how often they surprise you.

Ever wondered what kind of coffee a murderer drinks? Yeah, me neither.

I tumbled into the kitchen of Café La Femme, arms full of bakery boxes, a vintage mint-green sundress swirling around my knees. Late as usual, but at least I was wearing my favourite sandals.

A gal can cope with anything when her shoes match her bra.

Nin paused in the middle of kneading focaccia dough to stare at me from under her expressive eyebrows. I love her eyebrows. They make Frida Kahlo’s look meek. ‘They’re here again,’ she said, and went back to kneading. [read on…]