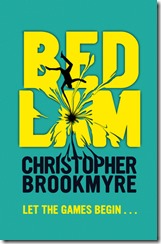 In Bedlam we see Brookmyre diverge from his usual fare of Scottish crime novels and venture into science fiction.  That being said, Bedlam  is still at its heart mystery fiction, with our hapless protagonist required to unravel who he is, where he is and how to take down the bad guys.


Ross Baker is computer scientist working for a shady American firm in the charming surrounds of industrial Stirling.  He works hard but never seems to get ahead, he thinks his girlfriend is about to leave him and the office psychopath has just screwed him over again when he decides to help one of his colleagues, Solderburn, who is working on side project.

He consents to be scanned by Solderburn’s new cobbled together scanner and wakes up inside a 1990’s first person shooter called Starfire.  From this point on he’s on his own and has to figure out where he is, if he’s still Ross Baker and how to get home.

It’s not a new idea, being transported into a video game, but Brookmyre has reworked the idea and given us a story that will be a trip down nostalgia lane for anyone who grew up gaming from the late 80’s onward combined with some techno thriller trappings.  There’s some good in-jokes and some not so subtle social commentary – Brookmyre did win a laugh from me with a reference to Daily Mail readers.

I did, however, find it a bit slow going until the last quarter of the book where the pace picked up and both the reader and Ross had a better picture of where things were going. There’s also an info dump at the end of the book which is an info dump in both the literal and narrative sense.  Ross gets injected with updated information on what’s going on in the outside world bringing he and the reader up to date. It felt like Brookmyre was glossing over what might have been good techno-thriller material but I don’t know that I can suggest another way to have worked the information into the story without revealing some of the mystery.

If you are looking for a mystery novel with a difference, if you enjoy Brookmyre’s humour and you’re a fan of gaming you’ll enjoy Bedlam, as for the techno thiller aspects, it just doesn't move fast enough for me.