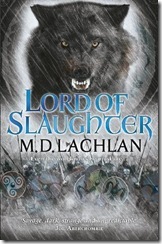 Lord of Slaughter is the third and final instalment of M.D. Lachlan’s Craw Trilogy ( Edit: apparently its not a trilogy and the author is at a loss as to explain how it acquired the series title Craw) .  Rooted firmly in Norse mythology, Lachlan delivers a tale of myth, magic, and reincarnation, interwoven with the history surrounding Constantinople circa 988 AD.

Lord of Slaughter continues the story of the mythological figures involved with the tale of Odin.  These figures, the wolf man & the lady are caught in a cycle, condemned to repeat it through countless lives until they can kill Odin and bring about Ragnarok.

So if you have read the preceding two books, Lord of Slaughter may start to wear a little thin, as its underlying theme is the same.  That said, the surface tale and setting is different and for awhile at least, the reader has to figure out who represents who in the mythological sense.

Loys, a former monk has escaped to Constantinople with his pregnant beloved Beatrice, daughter of a very angry and very violent Frankish lord.  They are low on money, but in love. A scholar, Loys hopes to find work in the greatest city on earth so that he can return Beatrice to the living she is accustomed to.

Beatrice’s father has sent a former Varangian mercenary and Loys’ fellow monk Azemar to kill him and return Beatrice to her father.

At the same time the Emperor returns to Constantinople with his Varangian Guard, who he promptly leaves outside the city while heading off on another expedition.  The Varangian’s make the Greek inhabitants of Constantinople nervous and tensions begin to build along with unnatural weather- ash field skies that turn day into a murky twilight.

Loys is employed as a patsy to try and find the blasphemous source of the weather. He finds that all is not what it seems, that those who are sworn to protect the city are the one’s who are at its rotting centre.

I enjoyed Lord of Slaughter more than Fenrir, both work well as stand alone texts but I think that the resolution of this novel served to round out the story much better.

Lachlan’s prose is what marks Lord of Slaughter out from your standard fantasy. It is a novel that makes you take notice of the author’s style and that style suits the oath bound warlike Varangians superbly.  You are left in no doubt of the harshness of living in 10th century Constantinople.

The mythic nature of parts of the story are well sketched with dreamlike sequences delivered in a imagery rich prose and this succession of imagery prepares as wonderfully for the story’s mythic conclusion.

Fans of Norse mythology and sagas will enjoy it.  It favours narrative, mythical sorcery over point and shoot fireballs and delivers a visceral fantasy read.