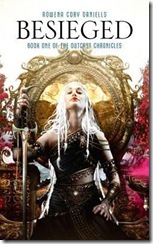 Besieged is the first book in The Outcast Chronicles by Rowena Cory Daniells.  The Chronicles see Daniells return to the world which she created in the T’En Trilogy.  The Chronicles are a prequel to that series and take place at a considerable distance from the evens featured in the earlier works.
It is not necessary then to have read the earlier trilogy, to understand or enjoy Besieged.

Where to start on Besieged?

There are good books that you can appreciate and enjoy, then there are books that you will lose sleep over or have to get you significant other to hide from you so you can get work done.  Besieged, for me is the latter.  I found its story and Daniells’ writing tugging at my consciousness at every waking moment of the two days it took me to read it.

The dark and twisted tale

Besieged is a saga of blood, family inheritance and the struggle for acceptance. A tale of political scheming, intrigue, and up close and personal violence.  A tale of character’s wants, desires, and ambitions causing misery and misfortune for those around them.  It is a story of two people and two cultures and a path of destruction they seem unable to avoid.

Sorne is the half blooded son of King Charald in a kingdom where T’En and the half blooded Melanjue are slandered as Wyrd’s, abominations in the eyes of the true men who follow the Churches of the Seven.  He is raised in secret by a high priest and forged, through deprivation and holy torture, into a weapon to use against the T’En.

Imoshen is secretly raised by a T’En Brotherhood, an action the breaks the 400 year old covenant between the male and female factions of T‘en culture. She has an untrained talent for wielding the T’En gift and an inquisitive nature unfettered by the dictates of the covenant.
Imoshen searches for acceptance and a home for her children.  Sorne searches for love and affection from a father who will give him none.
Both these characters are agents of change in two cultures set to collide with one another.

Dark fantasy not for the squeamish

I have been a fan of Rowena’s since consuming the King Rolen’s Kin Trilogy last year. Besieged features the same pacey writing but with much darker content.

The battles in Besieged occur off page.  Daniells focuses on the interpersonal, which makes some of the content darker than your general fantasy tale.  There’s not much left untouched – children die, and characters are tortured.  The violence isn’t gratuitous but Daniells’ skill in getting you to love characters and invest in them before she hurts them in front your eyes, is superlative. You simply must read on to ensure that characters obtain justice or carry out revenge.

If you were squeamish about the inclusion of a gay character in the King Rolen’s Kin series, then you may have to put on your big boy/girl pants to read Besieged.  The T’En culture is split into Brotherhoods and Sisterhoods, same sex coupling is common and expected, in addition to trysts that result in offspring.
There’s also aspects of sexual politics within in the Brotherhoods that might make male readers squirm uncomfortably.

Similar in tone to a Song of Ice and Fire, but complete

I have made comparisons between Daniells’ work and that of George R.R. Martin before, stating my preference for the former.  If you are looking for dark, gripping adult fantasy, but in a finished product, Besieged and I venture, the rest of the Chronicles, will sate your palate.