The graphic depiction of misogyny and implicit racism in some of their casting, aside, I find that I love the fact that we finally have a well presented fantasy epic on television who’s producers and writers know generally what the hell they are doing. Nothing resembling Hawk the Slayer for instance.

I love that for the most part they are giving talented actors a chance to shine and come to the attention of the big studios.

Recently its come to my notice that a few genre actors have stepped up Iwan Rheon of Misfits fame.

Rumour has it that Australian actor Noah Taylor and British actor Burn Gorman (of Torchwood fame) will be members of the Night’s watch.

Speaking of unknown actors did you catch Birdsong on ABC it featured two cast members from Game of Thrones.

Can you tell me who?

Oh and why didn’t I know Diana Rigg would be in it? 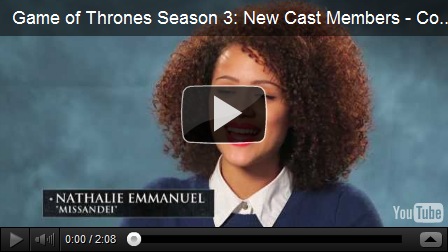