I want to talk a bit about the community, any sort of community’s response to harassment of any members.

View this summary to get you up to speed:

Summary
This year at Readercon, Rene Walling stalked and repeatedly harassed Genevieve Valentine. Despite an anti-harassment policy that specified a lifetime ban for harassers, multiple witnesses to the harassment, and at least one outside report establishing harassment as a long-term pattern of behavior by Walling, Readercon decided to ban Rene Walling for two years. [read more]

In some respects, unless I am missing something the process of reporting a harasser worked.  The complaint was taken seriously and investigated.

An environment existed where Genevieve Valentine felt confident in reporting.  Where the process came unstuck is in the handing down of the ‘sentence’. This consequently has undermined confidence in the part of the process that was working.

But I don’t know that discussing anything further on the incident will get anywhere. I think that they should have stuck to the policy.

Sufficed to say I am not convinced that a different group of people in the same position (the board) would not have come up with a different result.  I wasn’t there, I didn’t participate in the process but its easy to participate in armchair lawyering/judgement. I am reminded of a law experiment where journalists who were heavily critical of “light” sentences were given the role of judging a series of cases that mirrored those they had criticised.  The outcome? They delivered light sentences.

To my mind the only thing a con can do is provide is an atmosphere of safety, ensure that people feel confident in reporting and that the complaints will be investigated, offenders warned and/or expelled as soon as possible.

The reality of the situation is that a serious case of harassment, one that requires immediate removal of the offender is likely a case to be handled by police.  The much more prevalent, still serious, and harder to detect/verify set of behaviours carried out by experienced predators and clueless individuals alike requires that we investigate, gather witnesses and provide the accused with a chance to defend themselves- all of which takes time.

No con can guarantee zero harassment, they can only react after the fact and provide the assurance that matters will be dealt with professionally and promptly.

Let’s not forget either that these cons are run by dedicated volunteers, not individuals trained for the specific purpose that we are putting them to task on. We expect them to do the best they can.

What can we do?

Where I can see the most significant chance for a change in culture is within the larger Con going public.  It’s not just up to the Con organisers to deal with harassment but the attendees as well.

A harasser is does not generally sprout horns nor stink of sulphur.  They are our friends, people we look up to, people who we have had nothing but pleasant interactions with, people who have sacrificed time and effort for the things we all love doing. They have been in the past, famous authors.

I see in my internet wanderings, people discounting and minimising what Rene Walling has done.  Those discussions prompted a memory of some earlier training that I was required to do as part of my role as a teacher.

So please indulge me as I digress

Teachers have training in regards to reporting child abuse and even then, viewed in hindsight, trained people can fail to respond appropriately in regards to policy.

Harassment isn’t child abuse, but they are social problems of magnitude.

I am required to be trained regularly in the reporting of child abuse to the appropriate authorities for my work as a Teacher, I and all other teachers undergo yearly training or updates. The reason? The psychological factors involved in having to report child abuse require that we are constantly reminded of the personal biases/thought processes that impede that action.

What has this to do with Readercon or ANYcon?

There’s a model that I will outline below.  First, hopefully it highlights why we are seeing the behaviours and comments that seek to downplay the issue of harassment and second, make us more aware of our own on biases so that we have a chance to act,we will be able to negotiate them.

In one of my early  training sessions we were introduced to the “Discount Model” which rather nicely explains how humans, when confronted with any social problem of magnitude will discount what they are observing and minimise their chance of taking reasonable action (action that is within in our means taking into account personal safety etc.)

We do this because generally we don’t like getting involved in messy, social/personal situations, even more so when those who are the problem are friends, have power, are well liked etc.. 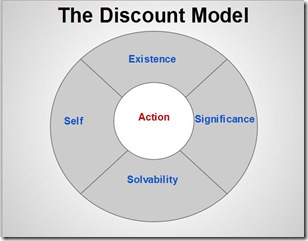 Now people come to the observation of an act of harassment from different places and experiences, which is why some people can go to a Con and not have seen or experienced any issues while being in the same room as others who have.

We have different experience, morals, genders and cultures that shape our perceptions. Those of us who have been assaulted/harassed will be hyper vigilant.  Those who have not, possibly oblivious.

The model, which presents 4 areas of potential impediment, is presented in no particular order:

Existence: the  challenge is getting around “there is no problem”.  Which might arise in situations where we are commenting on a situation second hand and espousing opinions like “women always make this stuff up”.  Thankfully I haven’t observed this in the current situation.  But there are some out there that think women are only out to trap men and make vexatious claims.

Significance: the problem is not very serious.  This I have seen mentioned in the comments section at the summary post linked above:

I’ve known René for years and years and do not understand what happened at ReaderCon. I read the Live Journal entries, and still don’t get it. He touched her elbow? He put his arm around her and helped her through a crowd? Maybe there’s a cultural difference, but in Montreal people are always hugging and kissing.

Solvability: there’s nothing that we can do about it, it’s just the way it is.  Now I haven’t observed this one directly in comments.  But we must question ourselves when we might give this excuse.  We can tackle the problem of harassment.

Self: I can’t do anything, that’s for the “insert faceless governing body here” .  It’s up to the Con committee to protect us?  Essentially it’s someone else’s problem, they should deal with it.  I’ve outlined what I think a convention committee can realistically do.

The rest of it is up to us.

Nice people, can be “just” nice people and they can be harassers too.  We are not our brother’s/sisters keeper but we can

a) act to stop them carrying out harassment or

If we are aware of the ways in which we might discount the problem then we we increase our ability to act.

The 4 areas above sound easy to identify, but we make these considerations in the blink of an eye without conscious consideration sometimes.

Did he really pat her on the arse? Oh well she seems okay with it?  One of the Con committee will step in if something gets out of hand? What if I look like a fool saying something?

Human interaction is complex and we have to make judgement calls.  Some people are very touch feely at cons and have long friendships that allow for behaviour that might raise eyebrows.  We have to realise though when we are making excuses for not acting, have to be self aware enough to differentiate.

And if in doubt there’s no real harm in asking someone if they are okay with the attention they are getting.

How do we achieve that?  An awareness raising vid sent to all attendees?  An explanation of your own self talk that will minimise your reaction?

A community discussion worth having at any rate.