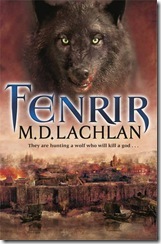 Fenrir is the second book in the Craw series.  The first Wolfsangel, received critical acclaim from some heavy hitters in the speculative fiction field -  Joe Abercrombie recommended it as “dark and original”, Adam Roberts classed it as “unputdownable”.

I haven’t read Wolfsangel and to tell you the truth that fact didn't hinder me as much as I thought it would.  Reviewing for publishing houses means that I do often get the second book in the series without having read the first.  Generally,  I find that with a little difficulty I can push on and pick up the story.  I didn’t have to with Fenrir, it stands pretty well on its own, at least initially.

The two narratives appear(as I said I’ve not read the first) to be linked through characters that reincarnate, for want of a better term.  Throughout Fenrir three central characters have flashbacks or memories of previous lives.

Fenrir unfolds,however, as a stand alone book, with characters presented with the usual depth and vigour a writer would employ if they were introducing them for the first time – there’s no obvious info dumps to bring latecomers up to speed.

So, the story
Paris lies besieged by one of several Viking armies.  The King of the Franks, used to buying the Vikings off with silver does nothing.  The Viking army will lift the siege if the Count of Paris will hand over his sister to the Sorcerer Munin.

Unable to sell his sister, the Lady Aelis into slavery or death, he calls on on the living saint, the blind and crippled Jehan of St Germain, to intercede with God and resolve the situation for him.

The decision is soon taken out of their hands,however,  as the Wolfman, a shaman, intent on saving the Lady Aelis spirits the young noble out of Paris and a Viking war party manages to snatch the Jehan from the count’s protection.

What follows is a dark and twisted tale of adventure, involving Norse gods that walk as men and dark sorceries that seek to bring about the end of the world.

“Old Skool” Sword and Sorcery
Abercrombie was right, this tale is dark and original- a very earthy blend of Norse myth and magic, that bonds well with the historical context.  I feel Lachlan has captured the essence, the rough edged vitality of Viking culture and woven a concept of magic through it that feels possible and very culturally appropriate.  There’s no magic spells in a Harry Potter sense, the magic is runic and borne out of pain and sacrifice.

A warning for those with tender stomachs, some might find it a little too dark in places with the description of the disfigurements that the Sorcerer Munin has inflicted upon her (to empower her magic) and non-consensual cannibalism experienced by one of the other characters.

Not your tree hugging Werewolf
While not strictly a Werewolf book, one of the central characters is a Werewolf(not the Wolfman mentioned above).  He’s not one of those, six-pack toting teens that readers of Twilight might barrack for though.  No, the werewolf in this tale has more in common with such creatures as Grendel, a creature that is cursed and terrible to behold.  That being said, his tale appears to be a tragic one that the reader can sympathise with.

Issues
I felt the pace dropped off toward the end of the novel. There were extended scenes when Aelis, the count’s sister is remembering a previous life, (necessary no doubt for on-going plot) where I felt that the story brakes were on when we should have been accelerating.

I won’t tell you the ending, however, the resolution of the tale was unsatisfactory one for me.  To be fair to Lachlan though, this dissatisfaction stems from the fact that I am reading as a stand alone when in fact its a continuation of characters journeys from Wolfsangel.

Recommendations
Like I said the book has a very old school sword and sorcery feel to it.  Though it might also appeal those that enjoy historical fiction and don’t mind a little fantasy thrown in.  Not absolutely necessary to have read Wolfsangel but on reflection I think it’s advised, especially if you want to enjoy the the book fully.

It’s piqued my interest enough to chase down Wolfsangel and the third book when it’s released.

This book was provided by the publisher at no cost to myself
Did you enjoy this review? Would you like to read more? You can subscribe to the blog through a reader,by Email or Follow me on twitter.
Posted by Sean Wright at 12:51 PM