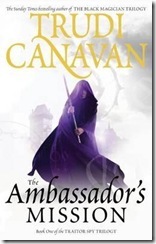 The Ambassador's Mission is the first book in The Traitor Spy Trilogy.  The third installment, The Traitor Queen is out next week (14 August for us lucky Australians).

The Ambassador's Mission was one of those blessed surprises that you get sometimes as a reviewer. Not that this was a review copy.  I was offered an interview with Trudi Canavan (out shortly) and to my shame she’s been one of those fantasy authors that has been forever on my TBR pile.

The beautiful and engaging covers have taunted me from afar when ever I have had the joy of walking into a bricks and mortar store.

So with a week to prepare myself for interview I decided to wrangle up some Trudi Canavan books from the library.

Now getting back to blessed surprises.

As a reviewer you get used to reviewing books outside your preferences, your favourite authors, even your genre.  That can wear on you after awhile, can start to make reading even good books a bit of a chore.  So what when that happens you need something refreshing to cleanse the palate, something that moves along and drags you through the story.  The Ambassador's Mission was that kind of a book. Within two paragraphs I knew I was going to kick back, relax and enjoy.

As the son of the late High Lord Akkarin, saviour of the city, and Sonea, the former street urchin turned Black Magician, Lorkin has a legacy of heroism and adventure to live up to. So when Lord Dannyl takes the position of Guild Ambassador to Sachaka, Lorkin volunteers to be his assistant in the hopes of making his mark on the world.
When news comes that Lorkin is in danger, the law that forbids Black Magicians leaving the city forces Sonea to trust that Dannyl will save him. Besides, her old friend Cery needs her as never before: someone has been assassinating Thieves, and when his family is targeted he finds evidence that this Thief Hunter uses magic.
Either a member of the Guild is hunting down the Thieves one by one, or there is - once again - a rogue magician on the streets of Imardin. And this one has full control of their powers - and is willing to kill with them.[source]

Canavan writes in a simple, transparent style that lets the story come to the fore.  In my upcoming interview with her she talks about how she likes to write accessible text, not dumbed down, but written so that inexperienced readers can enjoy it as much the veterans.

Simple also does not mean bland and while the text might be uncomplicated, Canavan doesn’t shy away from complex subjects.  Take for instance the gay relationships featured in The Ambassador's Mission.  The plot contains mystery and intrigue, sets up the major conflicts in the coming two books and manages to keep us on the edge of our seat in this one.

The depiction of magic is more narrative focused, you won’t find an detailed treatise on the inner workings of magic as one might expect from Brandon Sanderson.  I suspect that Canavan is unlikely to exercise the “kill your darlings” maxim with the ferocity of George R.R. Martin either.  The Ambassador's Mission and I suspect  the Traitor Spy trilogy are traditional fantasy in that we follow the heroes, see them threatened with danger and adversity but ultimately they are victorious.

The world building is nicely woven into the fabric of the story. The reader is not overwhelmed by a mountain of history and culture.  The book is sprinkled with flavouring that alludes to a larger meal. There is certainly enough however to differentiate cultures, to allow for plausible conflicts to arise and give depth to the story.

While The Ambassador's Mission introduces readers to characters from a previous trilogy, now much older and ready to pass on adventure and excitement to their children, I didn’t find it hard to pick up the gist of things, nor did I feel necessarily poorer for not having read the preceding works.

I’d happily recommend Canavan and The Ambassador's Mission to those teetering on the edge of considering fantasy, perhaps those who grew up with Harry Potter and who have a penchant for wizards.