So yesterday I traversed half the state (maybe an exaggeration, looking at the map) driving the two and a bit hours into Adelaide City for our inaugural Supanova. I think it’s important to support pop culture events like this even if I suspect that they won’t largely by my thing. 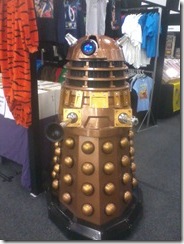 First up, great location.  The organizers get bonus points for the venue at the Adelaide Showgrounds.  The entire event was hosted inside a huge pavilion with air con – very important when the crowds start milling in.

Cosplayers we a bit light on comparing it to my Brisbane experience but there were a wide variety ranging from the “thrown together in an afternoon” to the professional.  I tried taking some shots but have decided that I either need a new camera or a better photographer.  Storm troopers and Daleks were out in force, combated by a smattering of Jedi and a small cadre of Fez wearing Doctors.

As always the author signing table (provided by Dymocks Adelaide) was good value.  Located right near the entrance of the exhibitors pavilion it was easy to find.  The one thing I love about Supanova, indeed the only reason I really go is to meet and chat with authors.  Thank goodness they don’t charge signing fees. 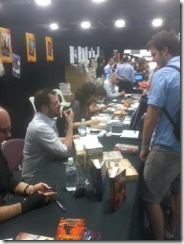 I was able to have a good chat with Sean Williams – who despite living in Adelaide has been a hard man to track down.  I got to meet Joe Abercrombie in person (have recorded an interview with Galactic Chat) and discover his talent for signing.  Seriously, the man can sing.

It was lovely to meet Trudie Canavan who also introduced me to her talented photographer husband/partner Paul while being careful not to give me spoilers for her book. Trudie was another guest on Galactic Chat and although we were both at the Natcon we hadn’t met previously.

I had to sheepishly confess to Fiona McIntosh (whose workshop I attended last year) that I had not completed my manuscript  but had been writing short work.  I bought a book and she seemed okay, signing it with “keep writing”.

Sean introduced me to DM Cornish, whose name I had come across but whose work had a eluded me.  The surprise of the day was meeting up with Colin Taber, a Perth author who I interviewed last year who has his trilogy coming to an end and is now writing an alternate history.

If I have one criticism for the day its Supanova’s treatment of the non headline acts.  Now I know the big draw cards are the Felicia Days and the James Masters - they were held in carpeted arenas.  The comic book artists,writers and authors were held in the acoustic equivalent of a cordoned off shopping mall ie tiled floors high ceilings.  Consequently it was at times hard to hear them speak or they were interrupted by announcements. This isn’t an Adelaide problem, I observed the same thing in Brisbane last year.

I did take time to sit in on some of the big names – Luke Perry and Malcolm-Jamal Warner did a wonderful free flowing talk about Jeremiah and show biz in general. They filled about half the seating area.  Felicia Day was standing room only, so to anyone who says she doesn’t have influence in the “Nerd/Geek/Scene” can go and eat their hat as far as I’m concerned.

Will I go again? I’d like Supanova to provide a better experience for fans of Comicbook artists, writers and authors in general.  While the MC for the author/comic book artist events was wonderful I felt that the venues chosen were poor and possibly effected attendance.